BY hellodrdavis on January 21, 2019 | Comments: one comment
Related : Soap Opera, Spoiler, Television, The Bold and the Beautiful 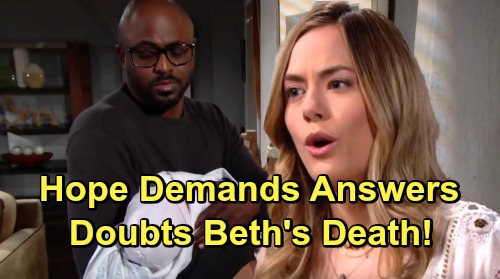 The Bold and the Beautiful spoilers tease that Hope Spencer (Annika Noelle) just won’t be able to wrap her head around Beth Spencer’s death. Hope has been grieving deeply for her loss, and she’s having a hard time believing that her baby is really gone for good. She felt Beth moving and kicking throughout her delivery and knew that she was alive and healthy.

Nothing about Beth’s subsequent death – which occurred after Hope lost consciousness – makes sense to Hope. Even though she wasn’t awake for what transpired, she still feels like she’s missing some details, so she’ll head to the one person who can give her some answers…Dr. Reese Buckingham (Wayne Brady).

Hope will visit with Reese and demand answers, and it doesn’t look like it’s going to be an easy conversation. So far, Reese has been able to skirt most of the difficult questions about the birth, just because everyone was so shocked and knee-deep in grief. But Hope’s going to want answers about how her baby could go from perfectly healthy to dead in a manner of moments.

Hope has been feeling guilty about losing consciousness during birth, and she’s even blamed herself for Beth’s death. A part of her feels that if she had remained conscious, things might have turned out differently. Surely, she’ll grill Reese about whether that had anything to do with Beth’s death.

Of course, Reese is going to have to be very careful in how he responds to Hope. It’s certainly looking like the real truth is that Beth was delivered healthy and was kidnapped by Reese, while he passed off someone else’s dead baby for Beth. If that’s what really happened, he’ll naturally want to keep a lid on it.

He’ll likely give Hope the same old song and dance that he offered after the delivery…that there was a sudden placental abruption and that Beth lost oxygen and died. But that’s likely not going to satisfy Hope, and she’ll probably press him for more details. But Reese won’t be able to tell Hope the truth, as he’s too deep into his scam to turn back now.

Assuming that Beth is actually the baby that Reese has offered to Steffy Forrester (Jacqueline MacInnes Wood) for adoption, then Reese is going to have to stick by his story. Reese needs that adoption to go through, so he can pay off the thug that’s threatening his own daughter Zoe Buckingham (Kiara Barnes).

It doesn’t look like Hope will make any headway in getting satisfying answers from Reese. Do you think she’ll finally accept that Beth is dead, or will she continue to have the “feeling” that Beth isn’t really gone? Stay tuned to the CBS soap and don’t forget to check CDL often for the latest Bold and the Beautiful spoilers, updates, and news.