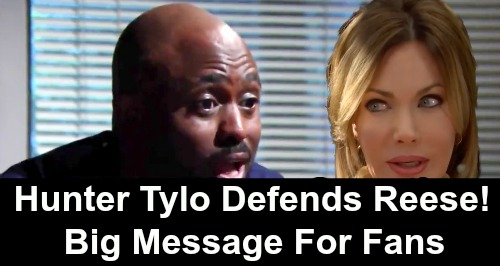 The Bold and the Beautiful (B&B) spoilers tease that one CBS soap star is speaking out to defend both her costar and his character. B&B fans know Dr. Reese Buckingham (Wayne Brady) is under a lot of pressure at the moment. He needs $200,000 or Zoe Buckingham (Kiara Barnes) could wind up dead.

Reese is also caught up in a somewhat suspicious romance with Dr. Taylor Hayes (Hunter Tylo). Zoe feels like Reese’s motives aren’t entirely pure here. Of course, what started out as an attempt at gold digging could turn into something real. Reese is a mess and Taylor will be his rock.

Hunter Tylo certainly seems to have a sympathetic view of Reese and what he’s up against. She was quick to defend Reese’s actions when fans started attacking him online. A deleted tweet expressed disgust over Reese’s apparent dead baby scheme, but Tylo saw the softer side of her onscreen love interest. She replied, “Reese’s daughter’s life was threatened … he panicked!”

Of course, that appears to confirm that Reese indeed swapped Beth Spencer out for a deceased kid and plans to sell her. Some viewers can understand why Reese did what he did and others refuse to cut him any slack at all. Regardless, Tylo urged everyone to make sure they separate real life from reel life! She had nothing but praise for Wayne Brady’s portrayal and the work he’s putting into this storyline.

“Remember folks- this is just a story,” Tylo said. “Wayne is a gentleman and a wonderful person, not to mention fine actor.” It sounds like Tylo is pretty protective of her costar and those who are lashing out as if he actually stole a baby. Brady’s just showing up on set and saying his lines. There’s no evil plot afoot in the studio! That’s only in The Bold and the Beautiful’s fantasy version of Los Angeles.

It’s nice to see Tylo stepping up for Brady as well as interacting with fans on social media. B&B viewers are a passionate bunch, so they can get a bit feisty. Tylo was happy to set the record straight about her view and undoubtedly hopes everyone will stay tuned for more drama!