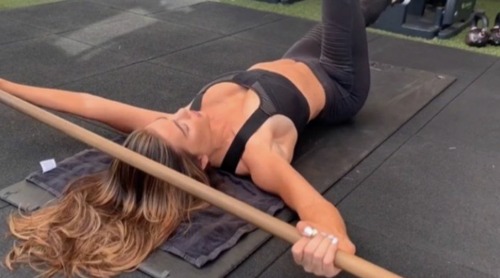 The Bold and the Beautiful (B&B) spoilers reveal that Darin Brooks (Wyatt Spencer) has a different job in mind for one of his costars. There’s another role he thinks Jacqueline MacInnes Wood (Steffy Forrester) would be fantastic at playing. Of course, Brooks isn’t suggesting Wood should leave the show! This was simply part of a fun interview in Soap Opera Digest, which involved an interesting question.

Brooks was asked which of his fellow cast members would make a great talk show host. Wood immediately came to mind, which makes sense if you’ve checked out her Instagram account. She has a unique sense of style and humor, so Brooks feels like she’d be perfectly suited to the gig. “I would say Jacqui’s got that vibe,” Brooks insisted. “I think she’s got the personality and could dig in and do that.”

Many of Wood’s fans probably agree! She’s a busy woman between acting and caring for her young son, who was born back in March. However, it’d be interesting if Wood could cook up a mini talk show of some sort. She always has intriguing things to say whenever The Bold and the Beautiful has Facebook live chats, so she’d undoubtedly be great just like Brooks predicted.

You can always check out Jacqueline MacInnes Wood’s Instagram stories though, which sometimes contain a few adventures in motherhood or fitness. As for the rest of Brooks’ interview, he had some other talk show host ideas as well. Brooks noted that John McCook (Eric Forrester) always has good questions and is quite personable. McCook definitely seems like an entertaining guy, so he’d be a nice fit.

Brooks even suggested himself as an option. “I could be the next Ryan Seacrest!” Brooks joked. Katrina Bowden (Florence “Flo” Fulton) agreed that Brooks would have some quality talk show hosting skills. “I could totally see Darin doing something like that,” Bowden said. She pointed out that Brooks is hilarious, but he can be serious when he needs to be. That’s the perfect balance for a job like that.

However, Brooks is awfully busy as well since he’s got a new daughter with his wife, Kelly Kruger (Mackenzie “Mac” Browning on The Young and the Restless). He’s probably not looking to add talk show host to his list of duties at the moment, but you never know what might happen down the road. Some soap stars have blogs, podcasts and other ways to engage with their fans.

As for what’s next on B&B, The Bold and the Beautiful spoilers say Wyatt will deal with love triangle drama. He’ll grow increasingly torn between Flo and Sally Spectra (Courtney Hope). Steffy will also get closer to Liam Spencer (Scott Clifton), so that’ll stir up more trouble with Hope Logan (Annika Noelle).

It sounds like some exciting episodes are on the way, so stay tuned. We’ll give you updates as other B&B news comes in. Stick with the CBS soap and don’t forget to check CDL often for the latest Bold and the Beautiful spoilers, updates and news.