BY Heather Hughes on November 26, 2019 | Comments: one comment
Related : Soap Opera, Spoiler, Television, The Bold and the Beautiful 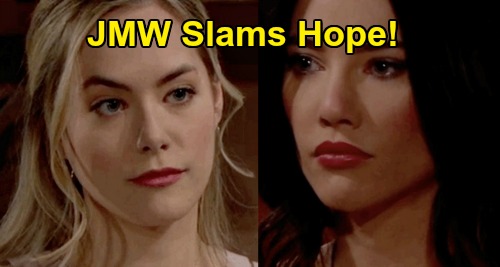 The Bold and the Beautiful (B&B) spoilers reveal that Jacqueline MacInnes Wood (Steffy Forrester) is speaking out about her current storyline. B&B fans know Steffy’s been concerned about Thomas Forrester (Matthew Atkinson), but Thomas paid her a visit recently to let her know he was OK. He also filled Steffy in on what Hope Logan (Annika Noelle) believed to be a deadly fall into an acid vat.

During the week of December 2-6, The Bold and the Beautiful spoilers say Steffy will blast Hope for her actions. She’ll definitely give Hope an earful about her brief cover-up with Brooke Forrester (Katherine Kelly Lang). Steffy will naturally bring up the custody issue as well. She’ll feel like Hope manipulated Thomas into signing the papers, so she’ll really let Hope have it.

That brings us to Wood’s comments, which were mostly directed at Hope herself. Wood did a little trash-talking in the new issue of Soap Opera Digest, so let’s look at what she had to say. For starters, Wood suggested Hope was paying far too much attention to Douglas Forrester (Henry Joseph Samiri). She hinted that Hope should be focused on connecting with Beth Spencer (River Davidson and Madeline Valdez) instead.

“Steffy feels like Hope showed her no consideration at all when she took Beth/Phoebe away and now she is going after Douglas, too? You’d think she would be bonding with her own child,” Wood said. Talk about a scorching burn! Wood had no qualms about sharing her view of Hope and the Logans in general. Though she clearly disapproves of Hope’s custody pursuit, she wasn’t surprised by it.

“Hope is being a typical Logan in terms of once she gets what she wants, she’ll just walk over anybody,” Wood insisted. She added that “Steffy is calling Hope out on her true colors.” It’s refreshing when soap stars hold nothing back and show they’ve got strong opinions just like fans do.

Let’s be honest: bashing the characters you hate can be almost as fun as loving your favorites. As long as everyone’s being respectful to the actors who are just doing their jobs, there’s nothing wrong with dragging certain characters through the mud. Sometimes they deserve it!