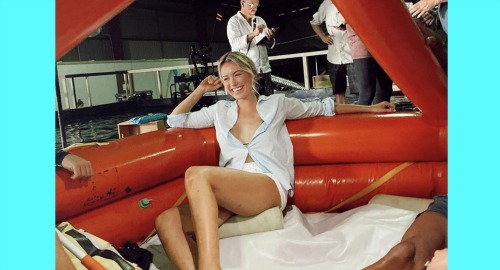 The Bold and the Beautiful (B&B) spoilers reveal that Katrina Bowden (Florence “Flo” Fulton) is set to return to B&B as she wraps up filming on a new thriller soon. She’s been shooting a movie called Great White, so that’s why you haven’t seen Flo on B&B lately. Bowden’s been having the time of her life in Australia – at least if her Instagram photos and stories are any indication!

However, Bowden’s almost done in the land down under. In the replies to a recent post, a Bold and the Beautiful fan wondered when Bowden would return to B&B. “One more week here and then I’m back!” Bowden promised on November 26. It won’t be long until Bowden returns to the CBS studio and starts shooting more Flo scenes.

Of course, that means more love triangle drama for Wyatt Spencer (Darin Brooks! He’s currently engaged to Sally Spectra (Courtney Hope), but for now much longer? “Wally” just doesn’t seem destined to last. It’s clear that Wyatt still has lingering feelings for Flo, especially after she gave up a kidney to save Katie Logan’s (Heather Tom) life. Flo’s sacrifice reminded Wyatt of her good heart and what he loves about her.

Even so, Wyatt knows Flo hurt Liam Spencer (Scott Clifton), Hope Logan (Annika Noelle) and Steffy Forrester (Jacqueline MacInnes Wood) deeply. Flo’s role in the baby swap plot isn’t easy to forgive and it definitely isn’t easy to forget. Nevertheless, Wyatt will find it difficult to shake the love he feels for Flo. That’ll only add to the drama between Sally and Wyatt, which is set to heat up soon.

The Bold and the Beautiful spoilers say Sally will make a major blunder. She’ll put her foot in her mouth and leave Wyatt demanding answers. The conversation will result in Sally pushing for a quick elopement, but Wyatt should have some issues with that plan. He’ll end up making a huge life declaration, so he may realize he’s not on the same page with Sally about a lot of things.

Wyatt’s been trying to honor his commitment to Sally, but he’s only setting her up for another round of heartache. He needs to be honest about his Flo feelings before they get in too deep. As for Sally, she needs to open her eyes and see the problems right in front of her. Instead of trying to lock Wyatt down with a quickie wedding, Sally needs to accept that maybe Wyatt just can’t be devoted to her.

Sally and Wyatt may hang in there until Flo gets back in the action, but you can bet Flo will still want her high school sweetheart. The Bold and the Beautiful spoilers say Wyatt will inevitably be pulled in Flo’s direction once again. Flo and Wyatt should be reigniting their spark before you know it.

Are you glad Katrina Bowden will be making a B&B comeback soon? Are you rooting for Wyatt and Flo or would you rather see him stick with Sally? We’ll give you updates as other news comes in. Stay tuned to the CBS soap and don’t forget to check CDL often for the latest Bold and the Beautiful spoilers, updates and news.

This raft is where I live now. Only accepting mail via shark-delivery. Super exclusive #greatwhitemovie