The Bold and the Beautiful Spoilers: Liam in Jeopardy Thanks to Hope’s Fiasco – Fearful Steffy Vows to Reunite with Her Love? 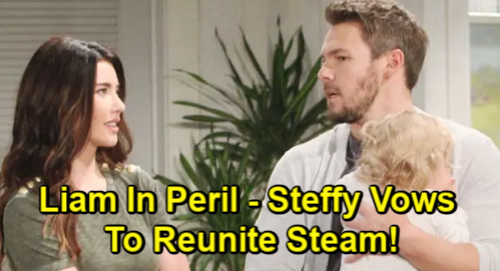 The Bold and the Beautiful (B&B) spoilers tease that Liam Spencer (Scott Clifton) could be in just as much danger as Hope Logan (Annika Noelle). B&B fans know Thomas Forrester (Matthew Atkinson) is fixated on Hope. The nature of Thomas’ obsession doesn’t really matter. Thomas may shift from trying to win Hope back to plotting against her, but he’ll be obsessed with her just the same.

As a result, Liam could find himself in real trouble here. He’ll soon grow suspicious of what Hope’s up to. The Bold and the Beautiful spoilers say Hope’s plan to secure joint custody of Douglas Forrester (Henry Joseph Samiri) won’t go as planned. Both Liam and Brooke Forrester (Katherine Kelly Lang) will grow increasingly fearful about Hope’s safety.

It turns out Hope won’t be the only person in danger due to her plot. There are only so many characters who fit in this storyline. Steffy Forrester (Jacqueline MacInnes Wood) could inadvertently get caught in the chaos – as could little Douglas himself.

However, Liam’s growing suspicions and protective nature will certainly make him a prime danger candidate. Consider all the times has Liam played rescue ranger!

Hope’s leaving Liam in the dark on the extent of her plans, which could keep Liam out of this a while. Even so, Liam’s bound to get involved as the peril hits. Could Liam be injured as a result of Hope’s scheme? If so, that’d be a great way to rev up the debate about Thomas.

Ridge Forrester (Thorsten Kaye) might feel his son was manipulated into heading down a dark path again. Brooke Forrester (Katherine Kelly Lang) could just think Thomas was showing his true colors. It’s easy to imagine Liam intervening to protect Hope and getting hurt. Could Liam be hospitalized? It’d be a fantastic strategy to provoke Steffy’s wrath against Hope and offer some emotional scenes.

Just imagine Steffy sitting at Liam’s bedside begging him not to leave the girls…or her. It might help Steffy realize her depth of her feelings. She could even decide she simply MUST have Liam back if he pulls through. Meanwhile, we’d have territorial Hope battling guilt and trying to navigate her growing rivalry with Steffy.

There’s no guarantee that’s how this story will play out, but it’s definitely worth contemplating danger for Liam. Again, there aren’t too many key players here. It has to be someone tied to Hope – and someone that could make a real impact in terms of drama. Since Liam’s at the center of this Hope and Steffy love triangle, he’d fit the bill.

Today on #BoldandBeautiful, Liam decides to stay longer at Steffy’s house, since Hope is still at the Forrester Halloween party. pic.twitter.com/REIXrEO4gT