The Bold and the Beautiful Spoilers: Liam Moves On With Steffy, Ridge With Shauna – Horrified By Hope and Brooke’s Thomas Cover-up 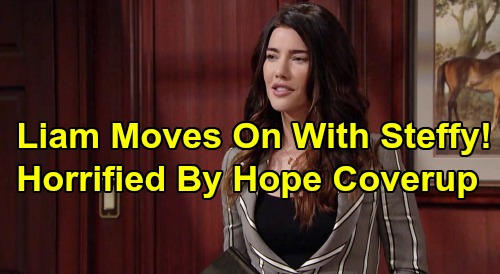 The Bold and the Beautiful (B&B) spoilers tease that Hope Logan (Annika Noelle) and Brooke Forrester (Katherine Kelly Lang) will suffer for their deception. This cover-up is a terrible idea, but it’s the one they’ll stick with – at least initially. Of course, the alternative isn’t much better! Hope believes she killed Thomas Forrester (Matthew Atkinson) by shoving him off a catwalk and into a deadly acid vat, so that news could blow up her relationship as well as Brooke’s.

However, deceiving Liam Spencer (Scott Clifton) and Ridge Forrester (Thorsten Kaye) may make matters worse. It would’ve been better for Hope to just come clean immediately and explain how everything went down. Hope had no idea it would all spiral out of control, so honesty would be the best policy here.

By staying quiet about what happened that night, Hope’s been setting herself up for heartache. Liam’s always viewed Hope as someone kind, loyal and honest. He probably won’t view her as any of those things once he learns she thought she killed Thomas and kept him out of the loop. Liam’s going to be hurt – and you can bet he’ll lean on Steffy Forrester (Jacqueline MacInnes Wood).

B&B fans know Steffy and Liam were already getting too close for comfort, but this will really take their relationship to another level. Liam will feel even closer to Steffy and more distant than ever from Hope. Even though Liam will likely try to get past Hope’s secret, it seems futile with Steffy drawing him in.

As for Brooke, her relationship with Ridge will completely implode. Ridge will get fed up with all the walls between them, but there’ll be no walls at all with Shauna Fulton (Denise Richards). Shauna will prove to Ridge that if he wants loyalty, he’s got it with her. The Bold and the Beautiful spoilers say she’ll back Ridge up 100 percent during the crisis ahead.

Once Ridge finds out Brooke lied about Thomas’ demise, he’s sure to fly off the handle. This is Ridge’s own son! He deserved to hear that Thomas’ body was eaten by lethal acid – even though it wasn’t really. Thomas’ survival doesn’t change Hope and Brooke’s deception. It shouldn’t change the backlash they’re receive either.

Brooke and Hope had better be prepared for the turmoil to come. Do you think Liam will move on with Steffy and Ridge will be with Shauna? The Bold and the Beautiful spoilers say some hot drama’s brewing, so don’t miss all the action. We’ll give you updates as other B&B details emerge. Stay tuned to the CBS soap and don’t forget to check CDL often for the latest Bold and the Beautiful spoilers, updates and news.