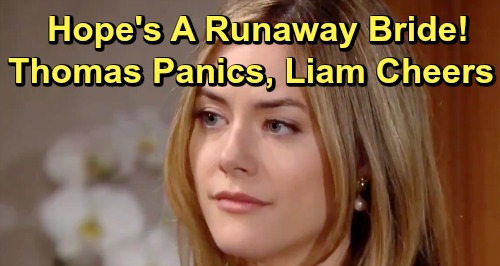 The Bold and the Beautiful (B&B) spoilers tease that Hope Logan (Annika Noelle) will have second thoughts about her rushed wedding to Thomas Forrester (Matthew Atkinson). During the week of July 15-19, Hope will start out on a resolute note. She’ll be convinced that Douglas Forrester (Henry Joseph Samiri) needs a mom immediately, so she’ll move forward with the ceremony as soon as possible.

However, doubts will slowly creep in – even if Hope doesn’t want to admit them at first. Brooke Forrester (Katherine Kelly Lang) may bring some of those doubts. She’ll rage over Hope’s decision and try to make her see what a terrible idea this is. Brooke won’t think Hope understands what she’s getting herself into. She’ll push Hope to take a step back and give herself some breathing room.

Liam Spencer (Scott Clifton) will be equally infuriated by Thomas’ push to get this done ASAP. Hope will undoubtedly tell everyone that this was her decision. She’ll make it clear that she’s doing this because she wants to, but nobody will really buy that. That’s especially true for Steffy Forrester (Jacqueline MacInnes Wood).

Steffy will pull Hope aside just before she’s set to tie the knot. She’ll suggest they should have a little talk before Hope and Thomas say their vows. Steffy will encourage Hope to be honest with herself about how she feels. She won’t want Hope to marry Thomas out of obligation to Douglas or because she just thinks it’s the right thing to do.

Marriage should be something that comes due to the deep love and connection between two people. Hope’s certainly not there yet with Thomas, and maybe she never will be. Steffy will contend that Hope shouldn’t get hitched if her heart’s not in the right place. She’ll feel like Hope will just set everyone up for disappointment, including little Douglas.

The Bold and the Beautiful spoilers say Hope will take a moment to mull over her tricky situation. She’ll have to figure out if she can really meet Thomas at the altar and fully close the door on Liam. It would mean signing on for a loveless marriage, which is far from what Hope and Liam had.

When Hope disappears before the ceremony’s set to begin, Liam will think she’s poised to be a runaway bride – at least he’ll hope so. He’ll be adamant that Thomas never should’ve set up this wedding at all. Thomas, on the other hand, will argue that Hope’s just running a bit behind. He’ll try to believe he’s still going to get the wife he wants, but he’ll undoubtedly be panicking deep down.

Much to Liam’s dismay, Hope will indeed appear after a long delay. B&B fans can expect the nuptials to kick off soon after. The Bold and the Beautiful spoilers say Hope will have a hard time getting through this, but it seems she’ll indeed make Thomas her husband.

It looks like some suspenseful moments are looming. We’ll give you updates as other B&B news comes in. Stay tuned to the CBS soap and don’t forget to check CDL often for the latest Bold and the Beautiful spoilers, updates and news.