BY Heather Hughes on October 29, 2019 | Comments: one comment
Related : Soap Opera, Spoiler, Television, The Bold and the Beautiful 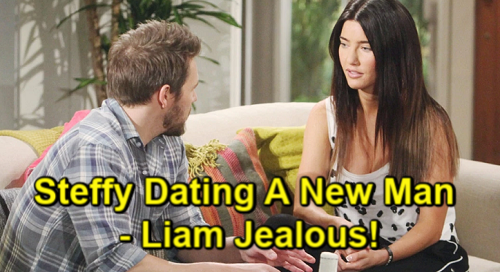 The Bold and the Beautiful (B&B) spoilers tease that Liam Spencer (Scott Clifton) will get some surprising news. During the week of November 4-8, Liam will get updates on Steffy Forrester’s (Jacqueline MacInnes Wood) love life.

He’ll be taken aback to learn Steffy’s dating again, which is a bit strange considering the recent showdown she had with Hope Logan (Annika Noelle).

Steffy certainly doesn’t seem to be over Liam, but that doesn’t mean she can’t keep her options open. She might as well play the field and at least have some fun. Steffy deserves it after losing “Phoebe Forrester” aka Beth Spencer (River Davidson and Madeline Valdez). That loss was brutal, but Steffy has to move on with her life – and dating is one way to go about it.

Liam Spencer Will Find Himself Drawn Back To Steffy Forrester

Of course, Liam will likely have plenty of questions. He cares about Steffy and will want to make sure she’s treated right. Liam might even have concerns about who could enter Kelly Spencer’s (Zoe Pennington) life, but Steffy may suggest it’s nothing that serious yet. There’s even a chance Steffy will drop this bomb to stir up a little jealousy. Regardless, the green-eyed monster could easily come out!

Liam hasn’t been on the same page with Hope about this Douglas Forrester (Henry Joseph Samiri) battle. Things are only going to get worse as Hope digs her heels in.

Meanwhile, Liam will find himself drawn to Steffy in the coming weeks. The fact that Steffy could be snatched off the market may make her even more appealing to B&B’s resident waffler.

Many Bold and the Beautiful fans would rather see Steffy with someone new, but there’s undoubtedly a point to all this bonding. The show likes to keep Scott Clifton front and center, so Liam probably won’t lose out to another hunk. For whatever reason, Hope and Steffy are required to find Liam irresistible.

Liam’s reaction to Steffy’s dating shocker could give her hope. She may sense that Liam’s jealous and know she can still reel him in. When you throw in the intensifying problems with Hope, Steffy could easily get Liam back. Will she ditch the dating game and surrender to “Steam’s” familiar spark?