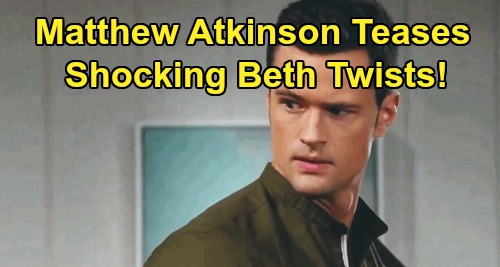 The Bold and the Beautiful (B&B) spoilers reveal that the CBS soap’s latest villain is speaking out on his character’s dark turn. In an interview with Soap Opera Digest, Matthew Atkinson weighed in on stepping into Thomas Forrester’s shoes and taking him on this wild ride. Thomas has certainly done some devious things and will continue with even more shockers during the week of July 29-August 2.

However, it turns out Atkinson had no idea what he was in for when he arrived. When asked if he knew about Thomas embracing the darkness, Atkinson confirmed that he was – well, kept in the dark! “No, not at all,” Atkinson said. “Coming in, I knew there was going to be some fun, interesting, dynamic storyline ahead, but I did not know to what extent these stories were going to go.”

Even though Thomas has turned downright despicable lately, Atkinson doesn’t think his character’s a true baddie. He suggested Thomas has indeed been behaving badly, but he argued that it’s a complex situation. Atkinson said, “I don’t think he’s a bad guy, but he is doing some horrible things with poor justifications…”

What Is Ahead For Thomas Forrester When Secret Blows Up?

Thomas has been doing everything in his power to secure a mother for Douglas Forrester (Henry Joseph Samiri) and a doting wife for himself.

Thomas loves Hope in his own twisted way, but it’s definitely not a healthy version of love. It’s more of an obsession – and The Bold and the Beautiful spoilers say it’s about to spiral out of control!

Of course, B&B fans are wondering what’s ahead for Thomas after all this blows up. Atkinson thinks Taylor Hayes (Hunter Tylo) should come back in the picture and help her son explore his issues. He suggested it’d be nice for Taylor to impart wisdom based on her own problems and history.

Offered Some Hints About New Bombshells In The Beth Reveal

The Bold and the Beautiful star is also eager to play the next phase of the story between Thomas and Ridge Forrester (Thorsten Kaye). He alluded to the conflict of the past over Caroline Spencer (Linsey Godfrey) and Douglas’ paternity. Atkinson obviously expects their father-son bond to get even more complicated now.

Finally, Thomas’ portrayer offered some hints about some new bombshells. Atkinson gushed, “This is just a great story with so many twists, and believe me, there are many more to come!”

Are you excited to see what happens after the big Beth Spencer reveal? We’ll give you updates as other B&B news comes in. Stay tuned to the CBS soap and don’t forget to check CDL often for the latest Bold and the Beautiful spoilers, updates and news.