The Bold and the Beautiful Spoilers: Monday, April 22 Update – Sally Shuts Thomas Down – Liam and Hope’s Date Gets Hot

BY Heather Hughes on April 22, 2019 | Comments: one comment
Related : Soap Opera, Spoiler, Television, The Bold and the Beautiful 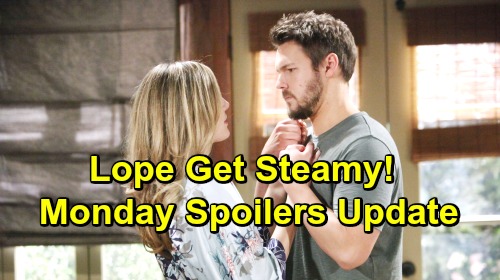 The Bold and the Beautiful (B&B) spoilers update for Monday, April 22, tease that Liam Spencer (Scott Clifton) will set the mood for love. He’s been having some intimacy issues in his marriage, but he’s trying his best to figure this out. Hope Spencer (Annika Noelle) went through the most painful ordeal of her life when she lost Beth Spencer, so Liam has to be understanding and patient.

However, Liam also wants to show Hope they can be the couple they once were – or at least something close to it. On Monday, he’ll carry out romantic plan to make Hope feel special and cared for. Liam will gently encourage Hope to let her walls down as they talk over dinner. He’ll hope this will lead to lovemaking after their meal wraps up, but he won’t be pushy about his desires and needs.

Hope will get that Liam is pulling out all the stops for her, so she’ll give him something in return. It won’t be long until a make-out session escalates on the couch, which means Liam will get his wish. Nevertheless, one round of sleeping together isn’t going to save their marriage. They’ll still have problems to address, but Thomas Forrester (Matthew Atkinson) will intend to exploit “Lope’s” weak spots.

B&B spoilers say Thomas will make a confession to Sally Spectra (Courtney Hope). He’ll tell her all about how he’s hung up on Hope and wants her back. Sally will encourage Thomas to slow his roll here. She may think it’s cruel to target Hope and Liam’s marriage when they’re still recovering from Beth’s “death,” but Thomas will insist he must be with Hope. He’ll plan to strike while they’re at their lowest.

Thomas will also keep pursuing the Hope for the Future angle. If he wants to grow closer to Hope, he has to spend more time with her. What better way to achieve that than to work together? Thomas mentioned his new designs to Hope, but he’ll really sell his skills to Brooke Forrester (Katherine Kelly Lang) and Ridge Forrester (Thorsten Kaye). He’ll do whatever he can to get on the HFTF design team.

The Bold and the Beautiful spoilers say Thomas will try other shady tactics later this week. He’ll do some truly terrible things, but he’ll only care about the outcome. Thomas will feel like if he can get Hope for himself, it’ll all be worth it in the end.