The Bold and the Beautiful Spoilers: Monday, August 19 Update – Hope and Ridge Get Payback – Flo Arrested For Beth Crimes

BY Heather Hughes on August 19, 2019 | Comments: one comment
Related : Soap Opera, Spoiler, Television, The Bold and the Beautiful 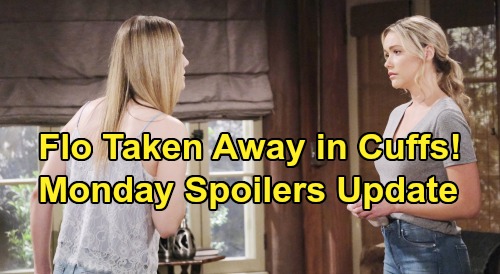 The Bold and the Beautiful (B&B) spoilers update for Monday, August 19, tease that Florence “Flo” Fulton (Katrina Bowden) will await Hope Forrester’s (Annika Noelle) answer. Flo shocked Hope by sneaking in the cabin to share her sob story. She was desperate for Hope to hear her out and potentially move past her horrible mistakes.

A tearful Flo asked if Hope could find it in her heart to forgive her, but Hope will insist it’s not happening! She’ll explode over Flo’s deception and deliver the slap of the century. Flo will take this fierce smack to the face and look back at Hope – broken and ashamed. The Bold and the Beautiful spoilers say Hope will point her finger at Flo and argue it’s exactly what she deserves.

Flo’s set to get what she’s got coming, which will please Hope and Ridge. There’s a good chance Flo will wiggle out of trouble later, but things will look bleak for now. Over with Wyatt Spencer (Darin Brooks), his mind will drift to old memories and a recent betrayal. Wyatt thought fate helped him hit the jackpot when Flo walked back into his life. Her lies made him rethink that, but his attitude will shift once again.

Wyatt has a forgiving heart, and a little piece of him has always loved Flo. That little piece became a huge chunk once they reconnected. Wyatt’s fell fast and hard again, so he can’t turn his feelings off completely. The Bold and the Beautiful spoilers say he’ll be torn as he considers the pain Flo’s caused. Wyatt will want to stay angry with Flo for what she did to his loved ones, but he’ll begin to soften anyway.

Flo could face a lengthy prison sentence based on her involvement after the fact with Beth’s kidnapping, so the news of her arrest will leave Wyatt troubled. He’ll feel sorry for Flo, so forgiveness may not be that far off. Do you think Wyatt should give Flo a pass or put her in the rearview mirror? We’ll give you updates as other B&B details emerge. Stick with the CBS soap and don’t forget to check CDL often for the latest Bold and the Beautiful spoilers, updates and news.