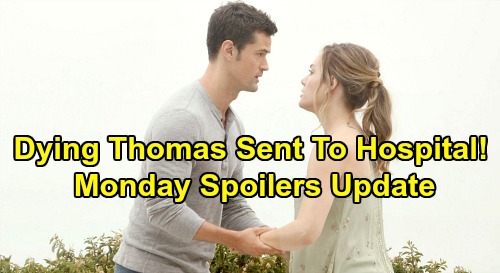 The Bold and the Beautiful (B&B) spoilers update for Monday, August 26, tease that Thomas Forrester’s (Matthew Atkinson) fall will leave him unconscious and fighting for his life. He got aggressive with Hope Logan (Annika Noelle) during their faceoff, and Brooke Forrester (Katherine Kelly Lang) just wouldn’t stand for that. She made sure Thomas backed off, but her shove sent Thomas tumbling off the cliff.

Ridge Forrester (Thorsten Kaye) just came on the scene, so he’ll be in shock over this horrible nightmare. It won’t be long until Ridge plays the blame game and accuses Brooke of attempted murder, but Thomas is what matters right now. He’ll be in dire condition on the rough terrain below, so Ridge and the others will race down to help. Brooke and Hope will definitely be flustered as this crisis plays out.

The Bold and the Beautiful spoilers say Hope will whip out her phone and dial 911. She’ll summon paramedics, so they’ll get over there as soon as possible. Meanwhile, Ridge will encourage his son to wake up and stay with him. He’ll worry that Thomas might die as a result of his injuries.

This is an awful situation that’ll bring some guilt on Hope’s part. She’ll feel like if she’d stayed inside to talk things out, Thomas never would’ve ended up in this terrible predicament. However, Hope had no way of knowing what Thomas would do next. She feared he was dangerous, so this really isn’t Hope’s fault at all.

Of course, Brooke will also hate how things turned out for Thomas, but she’ll be adamant that it wasn’t intentional. There’ll be plenty of time for Ridge and Brooke to debate this later, but getting Thomas to the hospital has to be the priority. He’ll be rushed to the ER, where Dr. Jordan Armstrong (Vincent Irizarry) will get to work immediately. This will mark Irizarry’s long-awaited debut in the role.

Other B&B spoilers say Bill Spencer (Don Diamont) will continue to fume over the baby swap damage. Dr. Reese Buckingham (Wayne Brady), Florence “Flo” Fulton (Katrina Bowden) and all the other secret-keepers are scum in Bill’s eyes. He’s livid since so many people were involved and so many more got hurt.

Bill will be especially outraged over Flo’s actions on Monday. He’ll assure Wyatt Spencer (Darin Brooks) and Justin Barber (Aaron D. Spears) that justice will indeed be served. Bill will vow to make certain Flo gets a lengthy sentence and truly pays the price for her mistakes.