The Bold and the Beautiful Spoilers: Monday, December 16 – Steffy & Liam Find Zoe, Who Spills Dirt On Thomas – Brooke Hopes For Reconciliation With Ridge

BY hellodrdavis on December 13, 2019 | Comments: 3 comments
Related : Soap Opera, Spoiler, Television, The Bold and the Beautiful 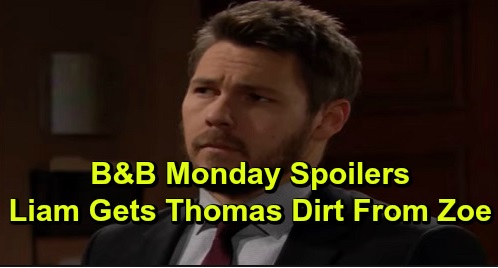 The Bold and the Beautiful spoilers for Monday, December 16, tease that Steffy Forrester (Jacqueline MacInnes Wood) will agree to work with Liam Spencer (Scott Clifton) to figure out what Thomas Forrester (Matthew Atkinson) is up to. As B&B viewers know, Liam has just asked a skeptical Steffy to team up with him to uncover Thomas’ plan. Liam doesn’t buy Thomas’ Mr. Good Guy act and he certainly doesn’t think that Thomas is reformed. Rather, he thinks that Thomas is still dead set on finagling a future with Hope Logan (Annika Noelle).

Well, Steffy wasn’t entirely enthused about the idea of helping to bring her own brother down, but she does want to know the truth about what’s going on with Thomas, so B&B spoilers say that she’ll tell Liam that she’ll work with him. And it looks like the first thing that Liam and Steffy will do together is to track down Thomas’ buddy Vinny Walker (Joe LoCicero), whom they think may have some special insight into Thomas’ motives and past deeds.

That’s a pretty good starting point, especially since B&B viewers know that Vinny has a lot of intel on Thomas that he could hand over. Vinny is the person who supplied Thomas with the drugs that he used to dose Liam with – which eventually caused Liam to sleep with Steffy. Neither Liam nor Steffy know about the drugging, and if Vinny were to spill that information, they’d both be furious.

Vinny also knows a lot about Thomas’ thought process and all of his past plans and obsessions over Hope, as well as Thomas’ serious animosity toward Brooke Forrester (Katherine Kelly Lang) and his desire to ruin Brooke and Ridge Forrester’s (Thorsten Kaye) marriage. There’s definitely a lot that Vinny could contribute to Liam and Steffy’s understanding of Thomas’ mindset in the past. But what about Thomas’ current mindset?

Well, according to B&B spoilers, while looking for Vinny, Liam and Steffy will encounter Zoe Buckingham (Kiara Barnes). It looks like they’ll show up at Vinny’s apartment, where Zoe is currently staying. Of course, Zoe will be feeling impatient and forgotten by Thomas, who has promised to bring her back to Forrester Creations at some point. But lately Zoe has been wondering just when all of this is going to happen, and if it’s going to happen.

The Bold and the Beautiful spoilers say that Zoe will wind up spilling all the tea on Thomas, and she should have some interesting information to impart. As B&B viewers will remember, Zoe kissed Thomas a while back, but he was not at all interested in her because of his obsession with Hope. Zoe knows all about how Thomas currently feels about Hope and that his endgame is to be with Hope and Douglas Forrester (Henry Joseph Samiri) as a true family.

That should all be very interesting to Liam and Steffy, and chances are, as they listen to Zoe’s information, they’ll get even more invested in exposing Thomas – and this will probably be especially true for Steffy, who should be horrified to hear about Thomas’ plan to take over Forrester Creations, where Steffy is currently Co-CEO.

Meanwhile, on the new episode of B&B on Monday, December 16, Brooke will be feeling heartbroken. As B&B viewers know, she was completely unable to get through to Ridge about Thomas, and Ridge was the first to declare their marriage over and sign the divorce papers. Now Ridge has the copy of the papers to be filed in his possession, and Brooke is hoping that he won’t file them.

According to B&B spoilers, Brooke will cling to hope that Ridge will finally see that Thomas hasn’t changed, so that there’s a chance of their marriage being saved. One wonders whether the information that Steffy and Liam find out from Zoe and/or Vinny will ultimately open Ridge’s eyes to Thomas a little more, and whether this might ultimately save “Bridge’s” marriage.