The Bold and the Beautiful Spoilers: Monday, December 9 Update – Steffy Warns Thomas Hands Off Hope – Ridge Gives Up on Brooke

BY Heather Hughes on December 9, 2019 | Comments: one comment
Related : Soap Opera, Spoiler, Television, The Bold and the Beautiful 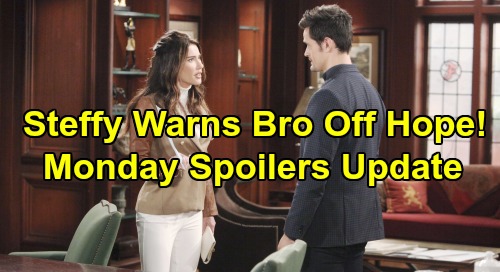 The Bold and the Beautiful (B&B) spoilers update for Monday, December 9, teases that Ridge Forrester (Thorsten Kaye) won’t get what he’s looking for. Despite all their problems, Ridge still loves Brooke Forrester (Katherine Kelly Lang) and desperately wants their marriage to work. He’s willing to move forward with Brooke if she can forgive Thomas Forrester (Matthew Atkinson), but she’ll refuse to budge on the matter.

Brooke will assure Ridge that her feelings about Thomas are never going to change. She won’t see how she can forgive Thomas when she still thinks the worst of him. Brooke could pretend, but what good would that do? It would only be a matter of time until Brooke couldn’t hold her tongue anymore. It’d just start another round of conflict, and they’d be right back where they started.

Brooke won’t be on board with Ridge’s demand, but he’s not going to like hers either. She’ll tell Ridge what it’s going to take for them to get back together and move on, but Ridge will immediately shut it down. There’s a good chance Brooke’s condition will involve shoving Thomas aside in one way or another, so Ridge just can’t accept that.

The Bold and the Beautiful spoilers say Ridge will accept that their marriage is over. He tried his best to find a solution, but Brooke will remain too stubborn to do her part. B&B fans can expect those divorce papers to be signed soon enough, so Ridge will end up leaning on Shauna Fulton (Denise Richards) in the aftermath.

In the meantime, Steffy Forrester (Jacqueline MacInnes Wood) will lay down the law with Thomas Forrester (Matthew Atkinson). She was appalled when she realized Thomas hadn’t learned his lesson at all. Thomas has been using Douglas Forrester (Henry Joseph Samiri) to lure Hope Logan (Annika Noelle) back to Forrester Creations full-time.

However, Thomas will fire back at his sister on Monday. They’ll argue about what’s best for all parties involved, but Thomas may have a distraction on his side. The Bold and the Beautiful spoilers say a battle is brewing at Forrester Creations. Thomas will present the idea of a fashion showdown between Steffy and Hope. He’ll want to pit their lines against each other and draw Hope closer in the process.

Steffy will hear about this offer at some point and grow suspicious of Thomas’ motives. Even so, Steffy will like the thought of highlighting her intimates line and defeating Hope in the process. The Bold and the Beautiful spoilers say some hot drama’s ahead, so stay tuned. We’ll give you updates as other B&B news comes in. Stick with the CBS soap and don’t forget to check CDL often for the latest Bold and the Beautiful spoilers, updates and news.