The Bold and the Beautiful Spoilers: Monday, July 15 Update – Hope and Thomas’ Mad Dash to the Altar – Brooke Hits the Roof

BY Heather Hughes on July 15, 2019 | Comments: one comment
Related : Soap Opera, Spoiler, Television, The Bold and the Beautiful 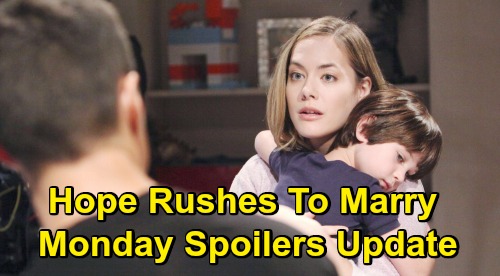 The Bold and the Beautiful (B&B) spoilers update for Monday, July 15, tease that Thomas Forrester (Matthew Atkinson) will fully support Hope Logan’s (Annika Noelle) decision. He played a rotten trick on Douglas Forrester (Henry Joseph Samiri) by making the poor kid think his room was haunted! Douglas got spooked by the ghost Thomas rigged, which brought Hope’s comfort and a choice about her future.

Now Hope wants to be a family with Thomas and Douglas ASAP, so her groom-to-be is ecstatic. Thomas will praise Hope for being such a good mom and assure her this means the world to both of them. He’ll be eager to get the ball rolling on their wedding, but Hope may realize this will put them in a bind. Most people take months or over a year to plan their nuptials, so this will be quite a challenge.

B&B fans can expect Thomas to make plenty of promises. He’ll let Hope know she doesn’t have to fret about anything at all. Thomas will just want Hope to focus on the benefits of becoming a family right away. Reminding Hope of how much Douglas needs a mother seems to be Thomas go-to strategy. He’ll vow to take care of everything and possibly suggest their loved ones will pitch in.

The problem is almost no one will support Thomas and Hope’s mad dash to the altar. Brooke Forrester (Katherine Kelly Lang) will be especially incensed by Thomas’ gall. She’ll think Ridge Forrester’s (Thorsten Kaye) son has some nerve manipulating Hope into rushed nuptials – and she’ll indeed be convinced this is more manipulation.

Brooke wasn’t keen on this marriage to begin with, but the fact that it’s happening immediately will leave her wound up. After Brooke explodes, Ridge will push her to think about the family “Thope’s” creating. He won’t think it’s so bad for Douglas to have a new mommy who loves him. Doting on Douglas has also helped Hope heal somewhat, so that’s another plus.

The Bold and the Beautiful spoilers say Ridge will defend Thomas’ motives and hint that Brooke needs to chill out. He’ll ask Brooke to back off and just let this wedding happen, but she’ll continue to stir the pot. Liam Spencer (Scott Clifton) will be equally outraged once he hears the news, so he’ll also cause some drama later in the week.

Until then, Sally Spectra’s (Courtney Hope) plot should crash and burn. She got rid of Florence “Flo” Fulton (Katrina Bowden) long enough to score some alone time with Wyatt Spencer (Darin Brooks), which led to a kiss. However, Sally was the one instigating it. Wyatt’s got some strong feelings for Flo, so he’ll likely push Sally away and insist things are over between them.