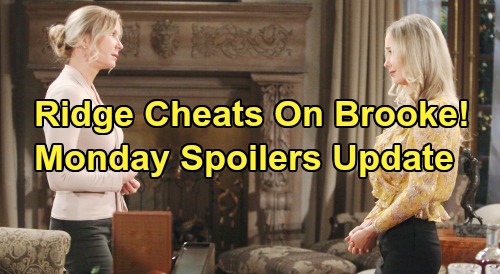 The Bold and the Beautiful spoilers for Monday, October 28, tease that Thomas Forrester (Matthew Atkinson), Douglas Forrester (Henry Joseph Samiri), and Ridge Forrester (Thorsten Kaye) will get themselves settled into the Forrester mansion. This came after a huge scene at Brooke Forrester’s (Katherine Kelly Lang) mansion where Brooke took off her wedding rings and returned them to Ridge in protest over the removal of Douglas from her home.

On Monday’s B&B episode, Ridge will sit down with Eric Forrester (John McCook) and fill him in on everything that went down. He’ll no doubt update Eric on how Brooke and Hope Logan (Annika Noelle) carried on and begged him and Thomas not to take Douglas away. It was certainly a bad scene, but ultimately Ridge feels that he did the right thing for Douglas and for everyone. Eric will weigh in with his opinion, which will likely be supportive of Ridge.

Ridge will also open up to his father about how his support of Thomas has caused a terrible situation in his marriage to Brooke. From Ridge’s perspective, Brooke forced him to choose between their marriage and Thomas, which is a forced choice that Ridge didn’t feel was necessary. He’ll lament to Eric about Brooke’s horrible attitude toward Thomas, which he’ll note is similar to how Stephanie Forrester (Susan Flannery) used to feel about Brooke.

Ridge will feel like history seems to be repeating itself, and that Brooke is now treating Thomas the way that Stephanie used to treat her. He’ll probably feel that all of the drama is simply unnecessary, and he won’t like it that the Forrester/Logan feud has been reignited. It’s just not the way Ridge will want things to be, but at the same time he’ll feel that he needs to support his son and fight for the Forrester side of things.

Later, on the new episode of The Bold and the Beautiful on Monday, October 28, Ridge will retire to his room in the guesthouse on the Forrester property, and he’ll be stunned to find someone already there and asleep in his bed. It will be none other than Shauna Fulton (Denise Richards)! Exactly how Shauna gets into Ridge’s bed remains to be seen, but it’s possible that she’ll be visiting the mansion to see her friend Quinn Forrester (Rena Sofer) and somehow wind up the guesthouse napping.

At any rate, Ridge will definitely encounter Shauna, and according to B&B spoilers, some comedic moments will ensue. It looks like there will be some element of confusion, perhaps as Shauna’s waking up to find her crush in the same room with her. One thing will then lead to another and things will get passionate as Shauna will end up kissing Ridge, who will kiss her right back. It doesn’t look like things will go any farther, though, so Shauna will have to be satisfied with a kiss for the time being.

But a kiss is considerable progress for Shauna, who’s got a serious crush on Ridge. She’ll probably take the kiss to mean that there’s a chance for the two of them, and this will likely lead to more daydreaming and fantasizing on her part. It probably won’t be long until Shauna decides to go after Ridge with everything she’s got, so look out Brooke! Anyway you look at it, Ridge kissing Shauna means he is cheating on Brooke.

Beware of things that go bump in the night! 👻 You won’t want to miss a minute of #BoldandBeautiful this week. pic.twitter.com/1eVSw6VMqN