BY hellodrdavis on September 20, 2019 | Comments: one comment
Related : Soap Opera, The Bold and the Beautiful 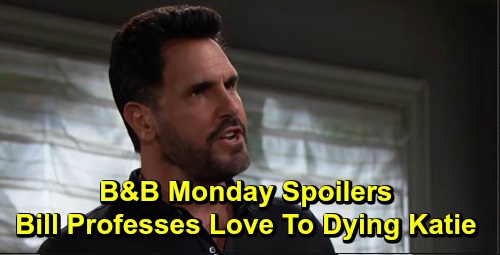 The Bold and the Beautiful spoilers for Monday, September 23, tease that Bill Spencer (Don Diamont) will be faced with a seriously scary situation. As B&B viewers know, he just spent some tender moments with Katie Logan (Heather Tom), who hasn’t been feeling well. Then Katie stood up and collapsed, completely losing consciousness. Bill panicked and called out to Katie as he frantically searched for a pulse.

From here, it looks like Katie will be rushed to the hospital, and Bill will be panicked. Bill recently turned over a new leaf, deeming that family is the most important thing to him, and he’s really been walking that walk lately. He’s become a devoted dad to Will Spencer (Finnegan George) and a doting husband to Katie. Life has been very good to Bill since he and Katie got back together, but now Katie’s sudden health crisis stands to get in the way of that.

Bill may see his life with Katie flash before his eyes as Katie is wheeled into the hospital. B&B spoilers say that Katie will be tended to by Dr. Jordan Armstrong (Vincent Irizarry), whom B&B viewers will remember as the same doctor who treated Thomas Forrester (Matthew Atkinson) after his fall off of the cliff. Katie will be in good hands, but it looks like there will be some tense moments while Dr. Armstrong and his medical team try to diagnose Katie’s problem.

Ongoing B&B spoilers indicate that Katie will have a serious problem with her kidneys. She’ll be in total kidney failure and her overall condition will be dire. Since Katie has her brother Storm Logan’s (William deVry) heart and is already in a compromised state, it will make the situation very serious. She’ll need a donor kidney, and fast.

But in the meantime, Bill will be able to spend some time with an unconscious Katie. According to B&B spoilers, Bill will hope for a miracle and for a quick diagnosis to Katie’s problem. He’ll profess his love and devotion to Katie, and even though she can’t hear him, he’ll speak to her with love and tenderness, hoping that at some level she can comprehend what he’s saying.

Meanwhile, on the new episode of B&B on Monday, September 23, Sally Spectra (Courtney Hope) will be dumfounded. As B&B viewers know, Wyatt Spencer (Darin Brooks) has just proposed to her, right there in the living room of his beach house! This was after Sally confessed that she loves Wyatt with her heart, but that she felt she needed to be careful given her horrible track record with relationships.

So, Wyatt decided to do the one thing that would make Sally feel most secure in their relationship, and he got down on bended knee and asked her to marry him. Of course, given that Sally has stated that she wants to take things slowly, she might not be too thrilled with this rushed proposal, but we have a feeling that Wyatt will have more to say to Sally about exactly why he’s proposing, and that just might sway her to say yes.

At any rate, it’s an open question at this point whether Sally will agree to be Mrs. Wyatt Spencer, or whether she’ll slam the brakes harder on their relationship. She certainly loves Wyatt with all of her heart, so there’s not an issue there, but she may question Wyatt’s feelings for Flo Fulton (Katrina Bowden), which could dampen the mood a bit.