The Bold and the Beautiful Spoilers Next 2 Weeks: Ridge Panics Over Steffy’s Reaction To Adopting Logan Baby

BY Heather Hughes on April 15, 2019 | Comments: one comment
Related : Soap Opera, Spoiler, Television, The Bold and the Beautiful 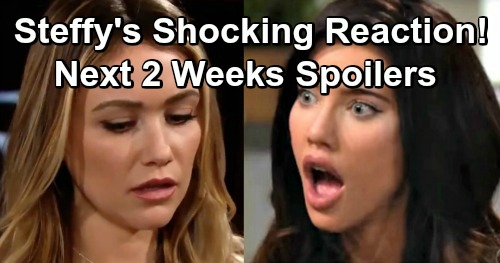 The Bold and the Beautiful (B&B) spoilers for the next two weeks tease that some big surprises are in store. During the week of April 15-19, Quinn Forrester (Rena Sofer) will interrogate Bill Spencer (Don Diamont) about his involvement with Florence “Flo” Fulton’s (Katrina Bowden) mom. She’ll want to know what things were really like between Bill and Shauna Fulton (Denise Richards) back then.

After Quinn pries some answers out of Bill, he’ll determine something interesting about Quinn. Bill will realize there’s a reason why Quinn is so tough on Wyatt Spencer’s (Darin Brooks) love interests. Perhaps Bill will feel like it’s because Quinn wants someone better than herself for her son. Then again, this could tie back to Flo and the guilt over breaking up what could’ve been a much lengthier love story.

It was Quinn’s fault they had to leave so abruptly, so that could be a factor here. No one has ever measured up to Flo’s gold standard in Quinn’s eyes, but she has no idea what this woman’s capable of. While Quinn’s singing Flo’s praises, Flo will be busy roping her mom into her illegal adoption cover-up. The Bold and the Beautiful spoilers say Flo will plead with Shauna to just cool it and stay quiet.

Shauna won’t want Flo to land behind bars, so she’ll go along with Flo’s plan after a fierce debate. Next, Hope Spencer (Annika Noelle) and Liam Spencer (Scott Clifton) will discuss how to tackle the topic with Steffy Forrester (Jacqueline MacInnes Wood). They’ll wonder when the right time to tell Steffy the truth might be.

Steffy deserves to know that “Phoebe Forrester’s” (Isabella de Armas and Redford Prindiville) “birth mom” is a Logan. Ridge Forrester (Thorsten Kaye) will think it’d be better to wait on coming clean, but Liam and Hope won’t want to put this off too long. Later, Liam will do something special for Hope and try to rev up the romance. He’ll want Hope to see that their marriage can come back from their loss.

Other B&B spoilers state that Thomas Forrester (Matthew Atkinson) will make a major admission. He’ll fill Ridge in on the feelings that’ve been stirred up inside him. Whenever Thomas watches Hope with Douglas Forrester (Henry Joseph Samiri), he can’t help but feel his heart glow.

Next, Thomas will urge Hope to send Liam over to Paris. He’ll think it’d be good for Liam to have some time with Steffy and the girls – especially since Liam could explain the whole Flo situation in person. Meanwhile, Liam will get some guidance from Wyatt Spencer (Darin Brooks) and Sally Spectra (Courtney Hope). He’ll worry that the plan to save his marriage isn’t going to work out like he planned.

During the week of April 22-26, Liam will refuse to give up. He’ll crank up the romance even more as he wines and dines Hope. She’ll pretend she’s loving it for Liam’s sake, but he may sense the sadness behind her eyes. It never really leaves her since she still misses Beth Spencer and mourns the life she might’ve had.

Other Bold and the Beautiful spoilers say Thomas will be a man with a plan. He’ll want to revamp Hope for the Future, so he’ll make a tempting pitch to Ridge and Brooke Forrester (Katherine Kelly Lang). Thomas will certainly use this idea to grow closer to Hope, but it seems he’ll genuinely want to help HFTF as well.

It sounds like some fantastic episodes are on the way. We’ll give you updates as other B&B news comes in. Stay tuned to the CBS soap and don’t forget to check CDL often for the latest Bold and the Beautiful spoilers, updates, and news.