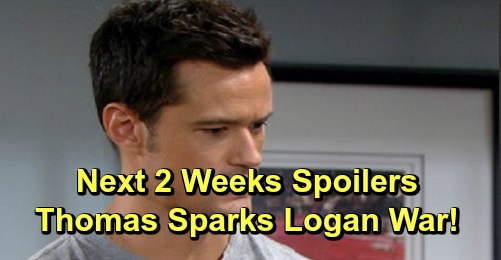 The Bold and the Beautiful (B&B) spoilers for the next two weeks tease that some heartbreaking moments are on the way. During the week of September 23-27, Bill Spencer (Don Diamont) will watch over unconscious Katie Logan (Heather Tom). She’ll be in bad shape at the hospital, but Bill will refuse to give up on his live – even after Dr. Jordan Armstrong (Vincent Irizarry) delivers a devastating diagnosis.

Dr. Armstrong will reveal that Katie’s both kidneys are failing, so Bill will wonder what this means. He’ll be crushed to learn Katie will face certain death without a donor. Her life will be on the line, so that’ll be a tough blow for the Logan clan. Brooke Forrester (Katherine Kelly Lang) will cry as she pushes Katie to hold on, and Donna Logan (Jennifer Gareis) will be hoping for a miracle, too.

Unfortunately, Thomas Forrester (Matthew Atkinson) will use the distraction to his advantage. The family will be busy tending to Katie, so that’ll give Thomas a chance to get sneaky. He’ll visit with Douglas Forrester (Henry Joseph Samiri) unsupervised, which is something he’s not allowed to do at the moment.

Ridge Forrester (Thorsten Kaye) will catch Thomas in the act, so he’ll want answers from his son. It won’t take Thomas long to start spinning a story. He’ll do his best to talk his way out of trouble, but Brooke won’t stand for this. She’ll get into a heated confrontation with Thomas eventually, and she’ll end up demanding that he leave the premises.

Obviously, Quinn will trash Sally and praise Flo. She’ll think Wyatt needs to break up with Sally ASAP and get his love story with Flo back on track. At Bikini Bar, Flo will bump into Sally and trade news with her. Will Sally mention Wyatt’s proposal? What updates will Flo have to pass along? Whatever the case, this could turn out to be a pretty tense encounter.

Later, Flo will attempt to talk some sense into her mother. Shauna Fulton (Denise Richards) will be stuck in a Ridge fantasy world. She’ll find herself imagining what it’d be like if Ridge were her man. The Bold and the Beautiful spoilers state that Flo will hope to shut this down. She’ll think Shauna’s being ridiculous since it’s never going to happen, but never say never on a soap!

That’s especially true since there’s so much conflict in Ridge and Brooke’s marriage. They’re trying to get a grip on it, but Thomas will cause a major setback. That’ll pull Shauna and Ridge closer, which could put them in dangerous territory.

During the week of September 30-October 4, Thomas will have another destructive plan. This time it’ll be all about the Logans and how to eliminate them from the Forresters’ lives. Thomas will want them all out of the company and as far away as possible. He’ll be bitter about some of the things that have gone down, so it sounds like quite a war’s brewing.

Back with Shauna, she’ll make a daring declaration. Shauna will insist this is only the beginning for them; she’ll feel confident she’s going to be in Ridge’s life for many years to come. The Bold and the Beautiful spoilers say Shauna’s obsession will grow stronger, but what about Ridge’s end? Will complicated feelings send him down a risky road?

It sounds like the next two weeks will bring some excitement. We’ll keep you posted as other B&B details emerge. Stay tuned to the CBS soap and don’t forget to check CDL often for the latest Bold and the Beautiful spoilers, updates and news.