The Bold and the Beautiful Spoilers Next 2 Weeks: Wyatt & Flo Can’t Stay Away From Each Other – Hope & Thomas Bond

BY Heather Hughes on March 17, 2019 | Comments: one comment
Related : Soap Opera, Spoiler, Television, The Bold and the Beautiful 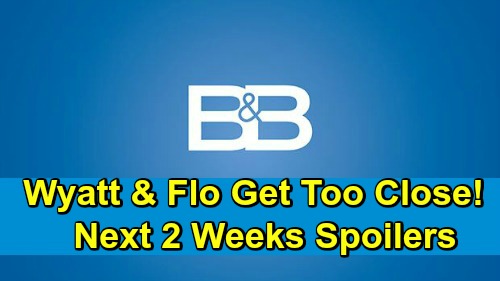 The Bold and the Beautiful (B&B) spoilers for the next two weeks tease that we’ll see some touching moments on the CBS soap. During the week of March 18-22, Thomas Forrester (Matthew Atkinson) will be in a fragile emotional state. He’ll continue to cope with Caroline Spencer’s (Linsey Godfrey) death and worry about Douglas Forrester (Henry Joseph Samiri) growing up without his mother.

Thomas’ fears will fade a bit when he notices Hope Spencer (Annika Noelle) going above and beyond. She’ll really make an effort to help Douglas, so Thomas will be grateful. Later, Thomas will spot a warm moment between Hope and Douglas. He’ll realize their connection is quickly growing.

Dr. Taylor Hayes (Hunter Tylo) will pick up on Hope’s bond with Douglas, too. She may think Hope’s better off focusing on Douglas than “Phoebe Forrester” (Isabella de Armas), who’s about to leave for Paris with her adoptive mom. Steffy Forrester (Jacqueline MacInnes) will bid farewell to her loved ones pretty soon, so Ridge Forrester (Thorsten Kaye) and Taylor will grow closer as they say goodbye.

The Bold and the Beautiful spoilers say Taylor will end up reflecting on her history with Ridge eventually. That’ll lead to some trouble when the exes lean in for a kiss. Brooke Forrester (Katherine Kelly Lang) will catch the lip lock and blast them for it, but she’ll soften toward Ridge later. Taylor, on the other hand, will be viewed as a cheating homewrecker.

Meanwhile, there’ll be a memorial service for Caroline. B&B spoilers say that’ll bring a somber episode, but it should help Thomas start the healing process. On a happier note, Bill Spencer (Don Diamont) and Katie Logan (Heather Tom) will get set up by the matchmaking team again. They’ll admit they’re enjoying all these little meetings and look forward to the next one.

During the week of March 25-29, Hope and Thomas will reflect on the past. The Bold and the Beautiful spoilers say they’ll open up about their current pain as well. They’ll understand each other better than the other characters on canvas, so they should be drawn to each other more and more.

Back with Brooke, her anger toward Taylor will erupt. Brooke will fume over the moves that’ve been made and argue that Taylor is still in love with Ridge. These enemies will get vicious, but they certainly won’t resolve their feud.

Elsewhere, Wyatt Spencer (Darin Brooks) will enjoy more time with his former flame. It sounds like his feelings for Florence “Flo” Fulton (Katrina Bowden) will grow stronger, so Sally Spectra (Courtney Hope) probably needs to stay on guard! Of course, Flo also needs to be careful. She still has that baby swap secret to keep under wraps, so the stakes will be higher than ever.

It sounds like the next two weeks will bring some terrific scenes. We’ll give you updates as other B&B news comes in. Stick with the CBS soap and don’t forget to check CDL often for the latest Bold and the Beautiful spoilers, updates, and news.