BY Heather Hughes on May 26, 2019 | Comments: 3 comments
Related : Soap Opera, Spoiler, Television, The Bold and the Beautiful 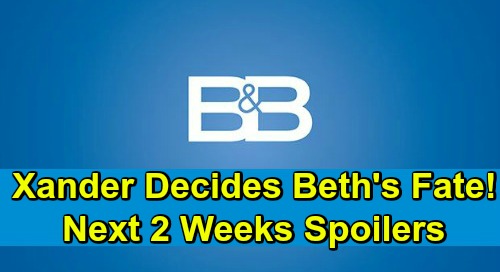 The Bold and the Beautiful (B&B) spoilers for the next two weeks tease that we’ll see more conflict and chaos. During the week of May 27-31, Liam Spencer (Scott Clifton) will suggest that Thomas Forrester’s (Matthew Atkinson) mission is futile. He’ll contend that Hope Spencer (Annika Noelle) will never actually fall for Thomas; she’s only going to love Douglas Forrester (Henry Joseph Samiri).

Meanwhile, Hope will encourage Steffy Forrester (Jacqueline MacInnes Wood) to go after her dreams – or at least Hope’s dreams. B&B spoilers say Hope will imagine what Steffy’s future should look like. She’ll surprise Steffy by asking her to make it a reality. This probably involves being a happy “Steam” family with two parents in love.

Steffy will resist embracing Hope’s vision, but we all know that’s what she wants deep down. Later, Thomas will seek out Hope and express approval about the end of her marriage. He’ll insist it was the right thing to do before he plants a kiss on her. Hope won’t be into it, so she’ll let Thomas know she still loves Liam and isn’t ready for anything new.

Instead, Hope will return to Liam so they can keep processing their divorce. They’ll bond over what might’ve been if they’d been able to raise Beth Spencer. Afterward, Liam will prepare a romantic evening for Hope. They’ll savor one last night as husband and wife before they part ways for good.

Other Bold and the Beautiful spoilers say Florence “Flo” Fulton (Katrina Bowden) and Wyatt Spencer (Darin Brooks) will grow closer. They’ll be all alone in the Forrester mansion, so they’ll take advantage of it. Wyatt and Flo will make love, so they should be on cloud nine by the end of the night.

However, Flo will face a devastating blow when she hears about the end of “Lope’s” marriage. She’ll meet up with Zoe Buckingham (Kiara Barnes) and insist they have to come clean about Beth. Back with Steffy, she’ll corner Thomas and question him about his motives. Steffy will worry this is more about what Thomas wants and less about what Douglas needs.

At Forrester Creations, Xander Avant (Adain Bradley) will get a shock. He’ll overhear that Beth is alive and flip out on his girlfriend. Zoe will push Xander to drop this, but he’ll demand answers. Once he gets them, Xander should be left reeling over the elaborate scheme.

It’ll be Zoe’s turn to freak during the week of June 3-7. She’ll fear Xander will run his mouth and expose all the lies. Zoe will know how much damage that would do, so she’ll hope Xander ultimately keeps quiet. That’s sure to be a difficult decision for Xander.

Finally, Steffy will take a walk down memory lane, but she won’t lead herself there. Thomas will manipulate the situation to make sure Steffy reminisces about Liam. He’ll think it’ll be easier to win Hope over if she sees that Liam has moved on.