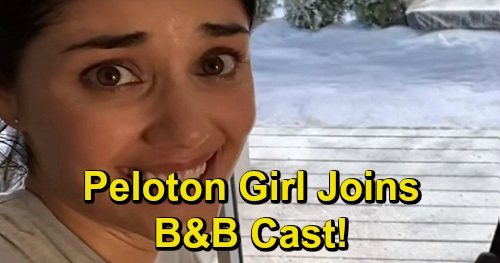 The Bold and the Beautiful (B&B) spoilers reveal that the CBS soap has a special guest star coming up – and you may know her from a recent ad campaign gone wrong. Monica Ruiz has become known as the “Peloton Girl” thanks to that holiday commercial, which was mocked all over the Internet after it went viral. The company’s stock dropped over 9 percent and wiped out $942 million from its market value in the days that followed.

However, Peloton’s loss was the Peloton Girl’s gain! Ruiz has definitely managed to turn that lemon into lemonade so far. She quickly scored another commercial for Ryan Reynolds’ gin company, Aviation Gin, which cleverly poked fun at the Peloton debacle. Now Ruiz is also joining the Bold and the Beautiful cast for a fun guest appearance.

According to TMZ, Ruiz showed up to shoot her one-day gig on Tuesday, December 17. Their sources state that Ruiz received $2,000 for her episode, which is set to air in late January. Although Ruiz’s role is just a one-time thing for now, B&B has left the door open for future appearances. If the audience responds well and they come up with something else for her, we could see more of Ruiz down the line.

Ruiz reportedly jumped at the chance to join The Bold and the Beautiful, so it sounds like she was excited to have some soapy fun. She might as well take full advantage of the Peloton publicity. This is one instance where negative press didn’t affect Ruiz’s career at all. In fact, it may have sent it soaring to new heights!

Of course, this isn’t the first time The Bold and the Beautiful has sought out a viral Internet sensation. They also brought on the “Fiji Water Girl” (aka Canadian model Kelleth Cuthbert) from the 72nd Golden Globes ceremony. It’s just a cute little stunt to generate some interest, so why not? It should be interesting to see who Ruiz works with and what her one-day role entails.