The Bold and the Beautiful Spoilers: Quinn Goes to War with Flo – Protects Wyatt From Former Lover

BY Heather Hughes on February 28, 2019 | Comments: one comment
Related : Soap Opera, Spoiler, Television, The Bold and the Beautiful 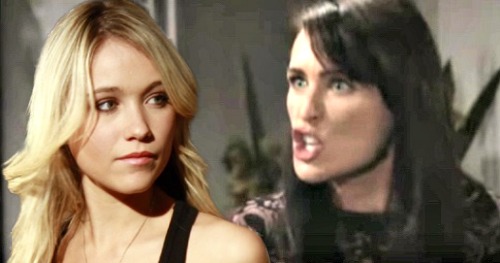 The Bold and the Beautiful (B&B) spoilers tease that Quinn Forrester (Rena Sofer) could have a huge story coming up. She’s been on the backburner for a while now, so Quinn fans are eager to see more of her. It looked like Quinn’s feud with Donna Logan (Jennifer Gareis) and Pam Douglas (Alley Mills) was going somewhere, but apparently not.

That storyline seems to have been dropped, but many fans probably aren’t complaining! It was a dud from the get-go, so we don’t mind sweeping that plot under the rug. Maybe B&B has plans for something bigger and better. Perhaps Quinn could find another foe and potentially land right in the middle of the baby swap drama.

Since The Bold and the Beautiful spoilers reveal that Florence “Flo” Fulton (Katrina Bowden) will be connected to Wyatt Spencer (Don Diamont) as his hot former lover, that means Quinn will fit in all this, too. Her overprotective side may come out as she works to shield her baby boy from harm.

Of course, Flo’s mom will arrive on April 3. Shauna Fulton (Denise Richards) will be just as determined to protect her own child, so another B&B battle could be brewing. The Bold and the Beautiful spoilers say conflict could erupt down the road.

Pam and Donna were recently working to get Quinn out of Eric Forrester’s (John McCook) life. Quinn could take a page out of their playbook and try to get Shauna out of the picture. Whether she digs up dirt or just reverts to her previously crazy behavior, Quinn could deliver some serious entertainment. It would be fun to watch Shauna drive Quinn to her breaking point.

Quinn may want rid of Flo as well since she’ll inevitably cause issues for Wyatt and Sally Spectra (Courtney Hope). Wyatt’s happy and in love, so Quinn may take drastic action to protect his newfound bliss. The Bold and the Beautiful spoilers say Quinn will always do whatever it takes for Wyatt’s sake!

Are you excited about the possibility of more airtime for Quinn? Do you think she’ll discover the baby swap and get caught up in the crisis? We’ll give you updates as other B&B news comes in. Stay tuned to the CBS soap and don’t forget to check CDL often for the latest Bold and the Beautiful spoilers, updates, and news.