The Bold and the Beautiful Spoilers: Quinn Takes Flo’s Side in Beth Crisis – Shauna & Flo’s Sole Ally as Families Turn Against Them 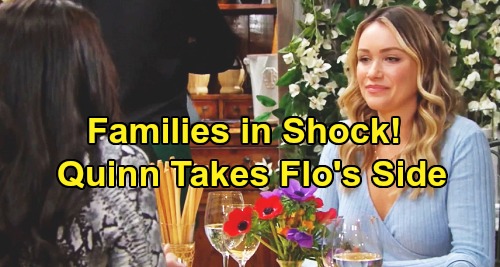 The Bold and the Beautiful spoilers tease that Florence “Flo” Fulton (Katrina Bowden) is going to be facing some tough times ahead. She knew things were going to be difficult after she confessed the truth about her role in Reese Buckingham’s (Wayne Brady) baby swap and adoption scam, but she won’t be prepared for the serious backlash from the Forrester, Logan, and Spencer families.

Flo’s now got some pretty powerful people working against her. For starters, there’s Brooke Forrester (Katherine Kelly Lang) and Ridge Forrester (Thorsten Kaye), who are determined to make Flo suffer the consequences of her actions.

According to B&B spoilers, Detective Alex Sanchez (Jeremy Ray Valdez) will soon be back on canvas, and that can only mean one thing – that he’s going to investigate Flo’s involvement in the kidnapping and illegal adoption.

And that won’t lead to anything good for Flo. She’s knee-deep in the kidnapping and adoption scam. Sure, she didn’t actually do the kidnapping, but she knew about it for months and didn’t go to the authorities.

Then she knowingly participated in a phony adoption. Plus, she knew about possible criminal activity related to Thomas Forrester’s (Matthew Atkinson) role in Emma Barber’s (Nia Sioux) death and didn’t come forward.

And there are other people who will certainly help lead the charge against Flo. There’s Bill Spencer (Don Diamont), who won’t be happy that his granddaughter Beth Spencer (River Davidson and Madeline Valdez) was kidnapped, not to mention Eric Forrester (John McCook), who will be livid about Steffy Forrester’s (Jacqueline MacInnes Wood) devastation in losing her adopted daughter.

But it looks like there will be one person – other than Shauna Fulton (Denise Richards) – who will come to sympathize with Flo. According to B&B spoilers, Quinn Forrester (Rena Sofer) will find herself taking Flo’s side. She certainly won’t condone anything that Flo did, but it looks like she’ll be able to put herself in Flo’s shoes and at least understand why Flo did what she did.

She’ll likely sympathize with Flo when she hears about how Flo got into a situation too deep, and then felt like she couldn’t get out. After all, Flo did reach a point where she wanted to come clean and reveal the truth about Beth being alive, but then Thomas stepped in and threatened her, Zoe Buckingham (Kiara Barnes), and Xander Avant (Adain Bradley) with serious harm.

So, it looks like we’ll have a situation where Quinn provides some friendship and moral support to Flo, and most likely to Shauna as well. She might also help them get legal representation – they’re going to need it! At any rate, it should be interesting to watch the situation unfold as everyone in the families align against Flo and Shauna…except for Quinn.

Do you think that Flo has a shot at redemption now that someone’s taking her side? Stay tuned to the CBS soap and don’t forget to check CDL often for the latest Bold and the Beautiful spoilers, updates, and news.