The Bold and the Beautiful Spoilers: Quinn Takes Flo’s Side – Supports Wyatt’s Ex Over Sally 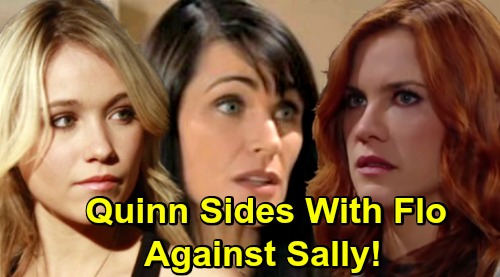 The Bold and the Beautiful (B&B) spoilers tease that Quinn Forrester (Jacqueline MacInnes Wood) could become a huge obstacle in Wyatt Spencer’s (Darin Brooks) relationship with Sally Spectra (Courtney Hope). It seems Quinn will do what she does best when she gets back to meddling next week. Quinn can never stay out of Wyatt’s love life for very long, so it’s time for another round of drama.

B&B fans know Wyatt was Florence “Flo” Fulton’s (Katrina Bowden) high school sweetheart. They were in love, but Wyatt was forced to leave town with Quinn abruptly. It looks like Quinn may feel guilty about how all that went down. She may have even approved of Flo back then – or at least now.

Whatever the case, The Bold and the Beautiful spoilers say Quinn will take Flo’s side during the week of March 25-29. She’ll end up being rather rude to Sally in the process. There’s a good chance Quinn will make her position clear. It may become apparent to Sally that Quinn is rooting for a Flo and Wyatt reunion.

Of course, Wyatt is still fighting his feelings at the moment. That’s why he’ll want to watch out for Sally’s tender heart and put Quinn in her place. The Bold and the Beautiful spoilers state that Wyatt will confront Quinn about her comments and demand an apology. He’ll insist Sally’s the one he wants and push Quinn to accept that.

However, we all know she won’t! Quinn will inevitably do some matchmaking or at least plant plenty of doubts for Sally. This could also lead to Quinn’s involvement in the baby saga. Let’s say Quinn grows closer to Flo and tries to nudge her in Wyatt’s direction. Since there are likely some lingering feelings anyway, sparking a Wyatt and Flo reunion shouldn’t be too hard.

Once Wyatt is finally with the gal Quinn wants, that’s when she could discover he truth about “Phoebe Forrester” (Isabella de Armas and Redford Prindiville). Will Quinn be the next character to discover Beth Spencer is alive? It’d put her in an interesting situation since she wouldn’t want to tear Flo and Wyatt apart.

This is an excellent opportunity to let Quinn return to her bad girl roots. She might let Hope Spencer (Annika Noelle) suffer for the sake of preserving Wyatt and Flo’s romance. Quinn wouldn’t want Flo to land in prison or even face severe backlash from Wyatt.