The Bold and the Beautiful Spoilers: Quinn’s Dark Side Returns as Mysteries Unravel – Brings Much-Needed Drama in Steffy’s Absence

BY Marcy Cohen on April 5, 2019 | Comments: one comment
Related : Soap Opera, Spoiler, Television, The Bold and the Beautiful 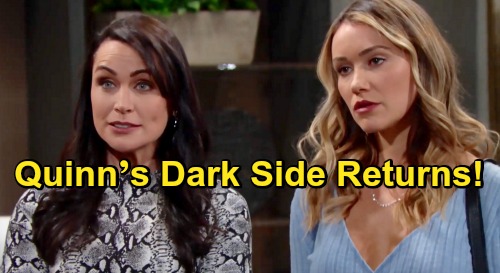 The Bold and the Beautiful (B&B) spoilers tease that we’ll see the return of a character who’s been missing – well, sort of anyway. It’s been a long time since we saw the real Quinn Forrester (Rena Sofer). What happened to our conniving little queen who always had a trick or two up her sleeve?

We saw some mild flashes of Quinn’s dark side during her feud with Donna Logan (Jennifer Gareis) and Pam Douglas (Alley Mills), but that story was apparently dropped. Fortunately, Quinn has a brand-new one coming up. It looks like it’ll involve the familiar scenario of interfering in Wyatt Spencer’s (Darin Brooks) love life, but it should lead to some surprises beyond that, too.

The Bold and the Beautiful spoilers say Quinn will continue to be “Team Flo,” so her preference for Florence “Flo” Fulton (Katrina Bowden) will cause issues. B&B fans can expect some growing conflict between Quinn and Sally Spectra (Courtney Hope) over the next few weeks. This could turn into a full-blown war if Quinn wants to take it that far.

Of course, Quinn could gain a partner in crime when her former BFF from Las Vegas shows up. Shauna Fulton (Denise Richards) is Flo’s mother and used to be quite chummy with Quinn. They’ll take the opportunity to catch up and potentially agree that their kids are meant to be together. It’s easy to imagine these moms teaming up on a Wyatt and Flo reunion mission.

In the new issue of Soap Opera Digest, Rena Sofer confirms that we’ll indeed see shades of the old Quinn. She may not go as far as she has in the past, but she won’t exactly stay on the straight and narrow either. The Bold and the Beautiful spoilers say Quinn could land in some trouble thanks to her upcoming antics. She’ll undoubtedly find some interesting tactics to keep viewers entertained.

Quinn could also find herself with a mystery to solve. Since Shauna won’t want Flo to know who her dad is, Quinn will want to discover why. Pushing the issue could lead to the exposure of Flo’s father, which would open up some intriguing possibilities.

Since Steffy Forrester (Jacqueline MacInnes Wood) will be out of the picture for a while, it’s great that the old Quinn is going to pay us a visit! She should keep things fun until Steffy makes a big comeback. We’ll give you updates as other B&B news comes in. Stick with the CBS soap and don’t forget to check CDL often for the latest Bold and the Beautiful spoilers, updates, and news.