The Bold and the Beautiful Spoilers: See Where Steffy Fits In – Scott Clifton & Annika Noelle Reveal What’s Next for Liam & Hope 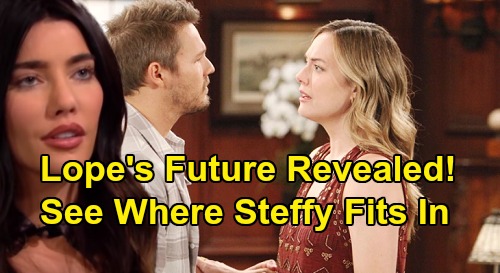 The Bold and the Beautiful (B&B) spoilers reveal that Liam Spencer (Scott Clifton) and Hope Logan (Annika Noelle) will get back in the action with more stories. They haven’t been onscreen as much since they wrapped up the baby swap reveal and immediate aftermath. It was a well-deserved break for Noelle and Clifton, who’d been carrying the load for months.

However, Liam and Hope will face another battle thanks to Thomas Forrester (Matthew Atkinson). His behavior will leave them worried about Douglas Forrester’s (Henry Joseph Samiri). Hope and Liam will take drastic steps to make sure Douglas is protected, which could put targets on their backs as far as Thomas is concerned.

Drama Is The Main Priority And Challenge For Actor Scott Clifton

What will happen as this hot plot moves along? Noelle and Clifton have some ideas! In an interview with Soap Opera Digest, both actors discussed what they’d like to see for their characters moving forward. They had some interesting ideas about where things should go from here.

For Clifton, drama is the priority. He likes the challenge of playing that far better than just living in a state of bliss. Clifton noted that B&B fans are always telling him they want “Lope” to live happily ever after. “And I always respond to them like, ‘You don’t want that. That would be terrible. That’s a death sentence…You want more obstacles and conflict,’” Clifton insisted.

Noelle admitted she’s pleased to not be crying all the time! She even got compliments after a hiatus on how she was “glowing.” Noelle suggested it was simply because she wasn’t sobbing nonstop. She added that she’d like to see Hope as “more of a force to be reckoned with,” but she doesn’t want Hope to lose her positive nature.

The Bold and the Beautiful actress also doesn’t seem keen on a “Lope” breakup just yet. “I think it would be cool if Hope and Liam took on some challenges together, ‘cause Thomas certainly isn’t going to make their lives easy coming up,” Noelle said. Of course, there’s no guarantee Noelle will get her wish! Thomas could easily spark a split if his Logan sabotage plans pan out.

Regardless, The Bold and the Beautiful spoilers say some highs and lows are ahead for “Lope.” Where does Steffy Forrester (Jacqueline MacInnes Wood) fit in? She could easily be part of the drama Clifton’s hoping for. Steffy will be involved in all the Thomas chaos, so she’ll remain in Liam and Hope’s orbit.

What do you want to see next for Liam, Hope and Steffy? We’ll give you updates as other B&B news comes in. Stick with the CBS soap and don’t forget to check CDL often for the latest Bold and the Beautiful spoilers, updates and news.