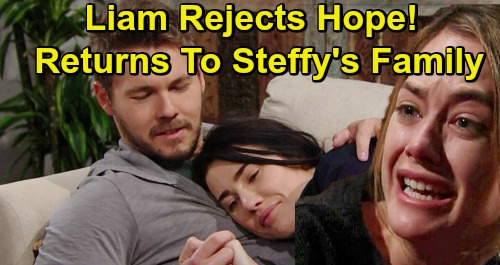 The Bold and the Beautiful (B&B) spoilers tease that Liam Spencer (Scott Clifton) and Hope Spencer (Annika Noelle) will face a bumpy road. Things are going pretty well in their marriage at the moment. Losing Beth Spencer was a difficult blow, but at least they’ve had each other to lean on.

Liam will begin to rely Hope even more over the next couple weeks. She’ll be happy to support her husband, so they’ll really be going strong. However, B&B fans know the peace won’t last. The strength they’ve found will start to fade and times will get much tougher.

If Liam urges Hope to dial down her visits with Phoebe, she may lash out at him. Hope may not see the problem. As fights erupt and their relationship becomes strained, Liam may find Steffy easier to talk to. Steffy wants him to be a father to Phoebe along with Kelly Spencer (Zoe Pennington and Chloe Teperman), so Liam should be around a lot.

It just seems like a matter of time until Steffy and Liam’s spark reignites. The Bold and the Beautiful spoilers say we could see Lope split as a Steam reunion brews. Unfortunately, Liam and Steffy’s renewed romance may not last. B&B may simply be setting Steffy up for an even bigger fall.

The truth about the baby swap has to come out eventually. When it does, Steffy will have to give the baby she came to know as her daughter back to Hope. That would be brutal enough, but what happens if Liam blames her for all this? He may feel like Steffy should’ve asked Dr. Taylor Hayes (Hunter Tylo) more questions over an adoption this iffy.

If Steffy learns the truth beforehand and keeps it from Liam, that’d give him even more of a reason to hate her guts. Steffy could end up losing both her baby and the man she loves!