The Bold and the Beautiful Spoilers: Steffy Erupts Over Brutal Losses – Fed Up with Hope’s Lack of Sympathy, Lets Rival Have It 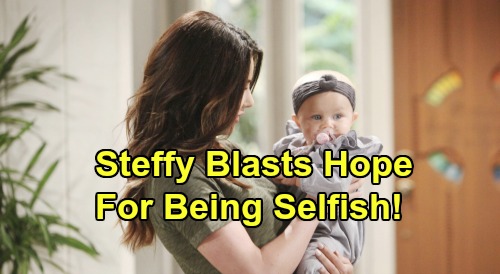 The Bold and the Beautiful (B&B) spoilers tease that Hope Logan (Annika Noelle) will realize Liam Spencer (Scott Clifton) and Steffy Forrester (Jacqueline MacInnes Wood) are getting too close for comfort. B&B fans know Hope was a bit worried after she got back together with Liam. She wondered if Steffy would be able to let Liam go, but Liam suggested Steffy knew where his heart was.

Of course, Steffy was busy mourning her loss at the time. She was forced to give Beth Spencer (River Davidson and Madeline Valdez) back to her rightful mother, so that’s been brutal. “Phoebe Forrester” suddenly disappeared from existence, which almost made it like a death Steffy had to deal with. She had to accept that she no longer had a second daughter.

Steffy probably couldn’t focus on much besides Beth for those first few weeks, but thoughts of Liam have likely been creeping back in. Although a loss like this isn’t something you really get over, Steffy has come to grips with the fact that Beth is Hope’s. Even so, Steffy loves and misses that little girl. That’s why Liam will take pity on her and give Steffy some secret Beth time during the week of October 14-18.

Just having Liam and Beth there with her will bring memories flooding back for Steffy. She’ll remember being a happy family – if only for a short while. Steffy let herself see the possibility of a true reunion with Liam. She was settling back into that dream for “Steam’s” future, but that shattered as soon as she found out “Phoebe” was Beth. It meant Liam and Hope could heal, but Steffy’s feeling broken.

The Bold and the Beautiful spoilers say Hope will get updates on this secret visit as well as a secret exchange between Liam and Steffy. Liam’s phone will tell Hope she has a good reason to be concerned. After Hope confronts her rival, it looks like Steffy will finally erupt over everything she’s been through.

Steffy will understand that Hope suffered tremendously while she thought Beth was dead. However, she’ll feel like Hope’s ignoring the other side of this. Steffy will think she’s entitled to be sad about losing both Beth AND her shot with Liam. She’ll defend her friendship with Kelly Spencer’s (Zoe Pennington) father, but Hope will worry that’s not going to be good enough for Steffy.

This has friends drifting back to lovers all over it – at least it will in Hope’s mind. Hope will argue with Steffy about who’s suffered more, but there could be much more suffering still to come for Hope. The Bold and the Beautiful spoilers say the conflict between Liam and Hope will rev up, so this couple could have an expiration date.

It sounds like some great stuff’s brewing, so don’t miss all the action. We’ll keep you posted as other B&B news comes in. Stay tuned to the CBS soap and don’t forget to check CDL often for the latest Bold and the Beautiful spoilers, updates and news.