BY Heather Hughes on July 25, 2019 | Comments: one comment
Related : Soap Opera, Spoiler, Television, The Bold and the Beautiful 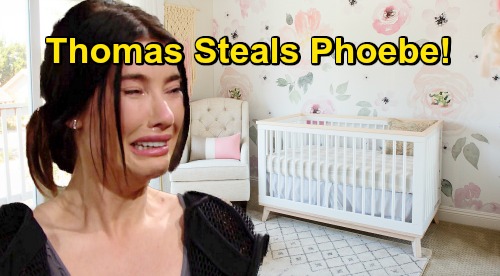 The Bold and the Beautiful (B&B) spoilers tease that Thomas Forrester (Matthew Atkinson) may commit a terrible act of betrayal. As the walls close in, Thomas’ head will be all over the place. He’ll come up with a desperate plan that has no chance of working, but that won’t stop him from carrying it out anyway.

Here’s what we know so far. Thomas will be backed into a corner thanks to Liam Spencer’s (Scott Clifton) digging. The Bold and the Beautiful spoilers say that he’ll think running away from the situation is his best bet. There’ll also be drugs in the mix thanks to an appearance from Vincent Walker (Joe LoCicero). Hope may be too out of it to resist when Thomas takes her somewhere with Douglas.

During the week of July 29-August 2, B&B spoilers say Steffy Forrester (Jacqueline MacInnes Wood) will discover something unusual in “Phoebe Forrester’s” (River Davidson and Madeline Valdez) room. There are a couple of options here. One might be that Steffy finds Thomas with “Phoebe” and wonders what’s up.

That might leave Thomas to lie his way out of this and suggest he just needed some niece time. Steffy would undoubtedly think that was a little odd, but she’d probably brush it off and thank him for offering to babysit. Then, Thomas could make his getaway with the kid. However, the more likely option might be that Steffy discovers an empty crib.

Either way, that crib seems poised to be empty eventually. The Bold and the Beautiful spoilers say all the signs are lining up here since Hope will be reunited with Beth during the week of August 5-9. Thomas hated to scare Douglas Forrester (Henry Joseph Samiri) with that ghost projection, but he decided to do it for the sake of their family. Likewise, Thomas may hate causing Steffy pain, but he may feel like he has no choice.

This way Thomas can get ahead of the secret and try to spin it when he reveals it to Hope. He certainly won’t want Liam filling Hope in and turning her against her new husband. Of course, Hope’s going to know Thomas is a nut job regardless, but he’ll cling to the idea of their blissful family bubble.

As for Steffy, she’ll be freaking out in a big way. If “Phoebe” is indeed missing as B&B indicates she will be, Steffy will be an emotional mess. Once Liam explains that “Phoebe” is actually Beth and Thomas hid the truth, they’ll undoubtedly worry about his next move. There’ll be a lot at stake for all parties involved.