The Bold and the Beautiful Spoilers: Steffy Picks a Side in Brooke & Ridge’s Cliff Fall Battle – Thomas Coma Family Crisis

BY Heather Hughes on August 24, 2019 | Comments: one comment
Related : Soap Opera, Spoiler, Television, The Bold and the Beautiful 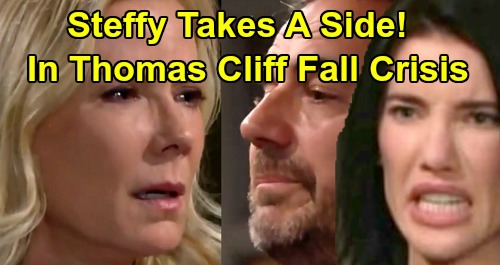 The Bold and the Beautiful (B&B) spoilers tease that Steffy Forrester (Thorsten Kaye) will be forced to pick a side. She wasn’t on hand to witness Hope Logan’s (Annika Noelle) showdown with Thomas Forrester (Matthew Atkinson). Steffy didn’t see Brooke Forrester (Katherine Kelly Lang) deliver that shove either. However, she’ll have to decide who she supports as accusations get hurled around.

Of course, it could take Steffy a while to get in on this. B&B isn’t using Steffy much right now, which might be Jacqueline MacInnes Wood’s choice since she’s got a baby at home. Her priorities may lie elsewhere. Even so, Steffy surely can’t avoid this family crisis forever. That’s her brother! Thomas will be dying in a hospital bed, so Steffy will hopefully get a chance to visit and weigh in on what happened.

Ridge Forrester (Thorsten Kaye) will seethe over Brooke’s actions and blame her for nearly costing him his son. He’ll still be battling some serious concerns during the week of August 26-30. It seems Dr. Jordan Armstrong (Vincent Irizarry) will have a grim outlook about Thomas’ recovery chances. Ridge will feel like Brooke’s rage toward Thomas put him in this terrible predicament.

Will Steffy agree that Brooke was in the wrong? It’s doubtful since Thomas knew the truth about “Phoebe Forrester” aka Beth Spencer (River Davidson and Madeline Valdez) and hid it. Steffy understands that Thomas hasn’t been acting like himself. He’s capable of horrible things now, and she may remind Ridge of that. Steffy could be the voice of reason that helps Ridge sooner or later.

The Bold and the Beautiful spoilers say Liam Spencer (Scott Clifton) will naturally side with Hope and Brooke on this. He won’t think either of them is responsible for Thomas’ fall. Hope will feel like she’s at fault for lashing out at Thomas and perhaps escalating the situation. She’ll wish she hadn’t gone outside and put Thomas in the position to go over the edge.

Nevertheless, Hope isn’t psychic and couldn’t have known what was ahead. She should appreciate it if Steffy takes up for her mom. The same goes for Liam, who will be adamant that Thomas was out of control. The three of them may agree that Brooke just did what had to be done.