The Bold and the Beautiful Spoilers: Steffy Returns From Paris, Goes to War With Hope Over Flo

BY Heather Hughes on April 29, 2019 | Comments: one comment
Related : Soap Opera, Spoiler, Television, The Bold and the Beautiful 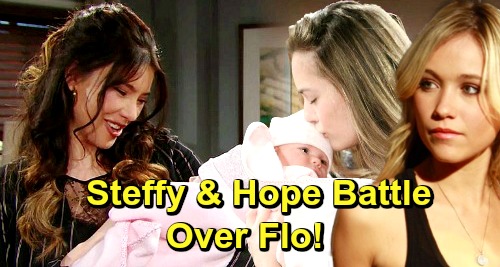 The Bold and the Beautiful (B&B) spoilers tease that Hope Spencer (Annika Noelle) will remain drawn to her new bestie and cousin, Florence “Flo” Fulton (Katrina Bowden). She sees Flo as someone she can connect with over loss and form a strong relationship with. Hope doesn’t realize Flo’s one of the reasons she’s faced so much heartache.

Ever since Beth Spencer “died,” Hope has been throwing herself into projects like this. She’s trying to make a difference where she can – like in Douglas Forrester’s (Henry Joseph Samiri) life and now Flo’s. It helps Hope to think she’s making the world a better place for at least a couple people in it.

Unfortunately, Hope won’t be doing that for Steffy Forrester (Jacqueline MacInnes Wood). In fact, she could be creating quite a mess for “Phoebe Forrester’s” (Isabella de Armas and Rosalind Aune) adoptive mom. B&B spoilers say Hope will push Flo to accept an excellent job at Forrester Creations. Despite Ridge Forrester’s (Thorsten Kaye) initial reluctance, he’ll eventually get on board, too.

Flo will undoubtedly take Hope up on the offer, but what happens once Steffy returns from Paris? The Bold and the Beautiful spoilers say Steffy should hit town again around late May. There’s a good chance she’ll be uncomfortable with Flo’s place at the company and in Hope’s life.

After all, Hope had become pretty obsessed with “Phoebe” before Steffy left town. Steffy may fear Hope’s just transferred that obsession to Flo. Furthermore, Steffy may have concerns about Flo somehow trying to get her “daughter” back. Brooke Forrester (Katherine Kelly Lang) dropped a hint about that shortly after Flo was revealed as a Logan, so that had to be a sign of what’s to come.

Flo would never try to take the baby from Steffy, but that won’t stop the war that’s brewing. By hiring Flo at Forrester Creations, Hope will put her cousin right in the middle of all this. The Bold and the Beautiful spoilers Flo could revive Hope and Steffy’s feud in a big way!

Steffy probably won’t be as quick to love and trust Flo now. Between all the coincidences and guilty behavior, Steffy could worry about Flo being in all their lives. Will Steffy’s long-awaited comeback lead to this renewed rivalry? It could intensify Flo’s guilt if Hope’s tirelessly defending her and Steffy’s expressing doubt after doubt.