The Bold and the Beautiful Spoilers: Steffy Sides With Thomas Against Hope For Douglas Custody – Siblings Unite Against The Logans?

BY hellodrdavis on October 22, 2019 | Comments: one comment
Related : Soap Opera, Spoiler, Television, The Bold and the Beautiful 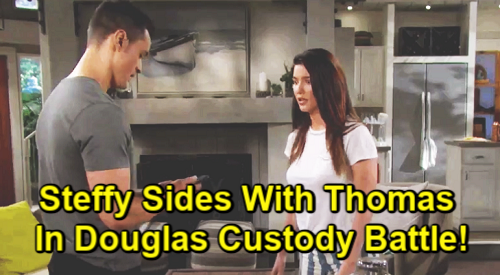 The Bold and the Beautiful spoilers tease that Steffy Forrester (Jacqueline MacInnes Wood) has been having a tough time when it comes to dealing with her brother Thomas Forrester (Matthew Atkinson).

She was devastated when she found out that Thomas was in on the whole Beth Spencer (River Davidson and Madeline Valdez) secret, and she’s been giving him the cold shoulder ever since. She just can’t believe that her own brother could have allowed her to bond with Beth for all those months.

As a result, Steffy has resisted even thinking about forgiving Thomas for his misdeeds. Ridge Forrester (Thorsten Kaye) has been trying with all of his might to get Steffy to reconcile with her brother, but it’s really hard for her to see his perspective when it comes to the Beth situation. She’s really had no reason to stand in solidarity with Thomas or consider taking him back, but it looks like that might be about to change.

As B&B viewers know, Steffy’s just had an infuriating experience with Hope Logan (Annika Noelle). Hope marched into Steffy’s home demanding that Steffy stay away from Liam Spencer (Scott Clifton) and that Steffy realize that Liam’s place is with her and Beth. Steffy’s response was interesting – she blasted Hope for being a Logan and a “taker.” She sounded suspiciously like Thomas for a moment there,

And that leads us to wonder whether Steffy and Thomas will soon have something important to bond over…their dislike for the Logans. Could Steffy and Thomas’ mutual anti-Logan sentiment draw them closer together and heal the rift between them? We think there’s a good chance that it might.

It certainly looks like there’s a major divide coming between the Forrester and the Logan families. According to B&B spoilers, Ridge will absolutely explode when he finds out that Brooke Forrester (Katherine Kelly Lang) has spearheaded an effort to wrestle custody of Douglas Forrester (Henry Joseph Samiri) away from Thomas. It looks like Ridge will finally put his foot down and assert his authority in the matter, taking both Thomas and Douglas to the Forrester mansion to live.

Will Steffy And Thomas Forrester Bond Over Their Logan Loathing?

One wonders how Steffy will react when she learns about the Logan plot to get custody of Douglas away from Thomas. She’ll surely still be peeved at Thomas for what he did with respect to Beth, but it’s hard to imagine her taking Brooke and Hope’s side in the matter. Surely, she’ll support her dad and Thomas in the dispute, and that may be the key to Steffy and Thomas finally reconciling and overcoming their differences.

We’ll see what ultimately happens between the families, but it certainly seems that the Forresters will ultimately band together, and there’s no better reason for a family to band together than to battle a common threat. In this case, the common threat will be the Logans, and both Thomas and Steffy will need each other for support, so we suspect that a reconciliation may be coming for these two.

Do you think we’ll see Steffy and Thomas bond over their feelings toward the Logans? Stay tuned to the CBS soap and don’t forget to check CDL often for the latest Bold and the Beautiful spoilers, updates, and news.