The Bold and the Beautiful Spoilers: Steffy Tells Thomas NO to Hope Joint Custody of Douglas – But Will Thomas Listen?

BY hellodrdavis on November 1, 2019 | Comments: one comment
Related : Soap Opera, Spoiler, Television, The Bold and the Beautiful 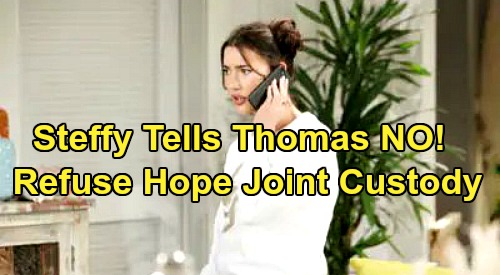 The Bold and the Beautiful spoilers tease that Steffy Forrester (Jacqueline MacInnes Wood) will soon find herself back in her brother’s orbit. As B&B viewers know, Steffy and Thomas Forrester (Matthew Atkinson) have been estranged ever since Steffy found out about Thomas’ part in keeping Beth Spencer’s (River Davidson and Madeline Valdez) existence a secret. She was horrified that her brother would allow her to bond with Beth, knowing that she belonged to Hope Logan (Annika Noelle) and Liam Spencer (Scott Clifton).

But it seems that Steffy will soon put her negative feelings for Thomas aside and focus on something more important – his son Douglas Forrester (Henry Joseph Samiri). As B&B viewers know, Steffy wasn’t at all impressed when Hope happened to mention the fact that she wanted Douglas to be part of her family with Liam and Beth. This came out during an argument that Steffy and Hope had, and Steffy was quick to point out to Hope that Douglas was neither her child nor her responsibility.

Well, it seems that Steffy will learn that Thomas is actually considering allowing Hope to wrangle joint custody of Douglas, and she won’t be happy. Of course, Hope is in the middle of a big plot to use Thomas’ feelings toward her as ammunition in order to get him to allow her to adopt Douglas, and it looks like Thomas will at least consider sharing custody with Hope. That will totally rub Steffy the wrong way, and she’ll have something to say about it.

Will Thomas Forrester Listen And Take His Sister’s Advice?

According to The Bold and the Beautiful spoilers, Steffy will have a talk with Thomas, during which she’ll let him know in no uncertain terms that giving Hope control over Douglas is a terrible idea.

She’ll probably tell him that he’d basically be handing over all his rights to someone else, because if Hope has joint custody, then she could eventually petition the court for full custody of Douglas. Steffy will probably think that this could come to fruition, given Hope’s apparent obsession with Douglas.

But will Thomas listen to his sister? Lately, he’s seemed torn between wanting full control over his son and wanting Hope again. And it seems that Thomas is going to start playing games with Hope, perhaps realizing that she’s trying to lead him on so that she can get joint custody of Douglas.

Steffy And Ridge Forrester Adamantly Against Giving Up His Rights

It’s unclear at this point whether Thomas will be fully aware of what Hope is doing and if he’d ever really fork over partial custody of his son, or if he’s just playing Hope right back.

One thing seems certain here, and that’s that both Steffy and Ridge Forrester (Thorsten Kaye) are going to be adamantly against Thomas signing away any iota of rights to Douglas. And it seems that both will make that abundantly clear to Thomas. That, plus the fact that Thomas doesn’t want the Logans anywhere near his family leads us to think that Thomas will probably not sign Hope’s papers no matter what Hope does.

What do you think? Will Thomas listen to Steffy and say no to Hope adopting Douglas? Stay tuned to the CBS soap and don’t forget to check CDL often for the latest Bold and the Beautiful spoilers, updates, and news.