BY Heather Hughes on August 5, 2019 | Comments: one comment
Related : Soap Opera, Spoiler, Television, The Bold and the Beautiful 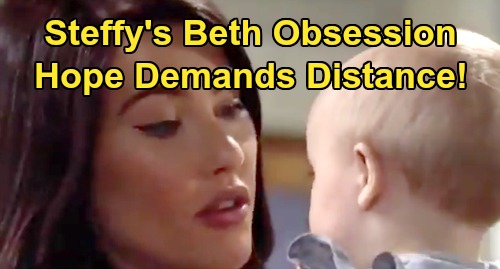 The Bold and the Beautiful (B&B) spoilers tease that Hope Forrester (Annika Noelle) will have a chance to spread some good news. Brooke Forrester (Katherine Kelly Lang) will be overjoyed when she realizes Hope’s daughter is alive and well. She’ll also be floored to learn Beth Spencer was swapped with a dead baby on Catalina island and illegally adopted by Steffy Forrester (Jacqueline MacInnes Wood).

It won’t be long until the other Logan women get updates, too. Katie Logan (Heather Tom) and Donna Logan (Jennifer Gareis) will be ecstatic for Hope once they’re brought up to speed. They know how much Hope’s suffered, so this shocker will leave their hearts full. Of course, they’ll hate the pain Steffy’s going to endure. Florence “Flo” Fulton’s (Katrina Bowden) involvement will also leave the Logan ladies infuriated.

Flo will get her fair share of backlash from all parties involved, but let’s focus on Beth. The family already thought she was a Logan through Flo, but knowing she came from Hope will be even better. The Bold and the Beautiful spoilers say Hope and the others will bond with Beth. They’ll all share some sweet family moments as they try to make up for lost time.

Unfortunately, this is sure to be excruciating for Steffy. She expected to raise “Phoebe Forrester” (River Davidson and Madeline Valdez) as her own child. Watching Hope take Beth Spencer will be brutal and so will watching Beth quickly become a true Logan. It’ll feel like Steffy’s hard work being “Phoebe’s” mother has just been obliterated. She’ll undoubtedly feel like she’s being erased from the kid’s life.

Hope will certainly allow Steffy to visit Beth, but things will never be like they were for Steffy. The Bold and the Beautiful spoilers say Steffy could easily push for too much time with Beth. Hope may feel like Steffy’s hanging onto a dream she can’t have. Steffy left for Paris to give “Lope” some space and curb Hope’s “Phoebe” obsession. Will Hope be the one trying to curb Steffy’s Beth obsession now?

It’s a different situation since Steffy has actually being serving as this child’s mother for months, but B&B could take a similar route anyway. Will Hope gently urge Steffy to create some distance? Will that fan the flames of conflict in the weeks ahead?