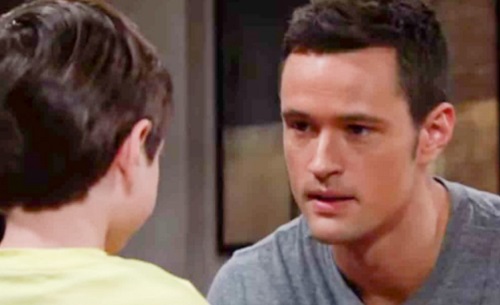 The Bold and the Beautiful (B&B) spoilers tease that Thomas Forrester (Matthew Atkinson) will have to cover his tracks. B&B viewers know Thomas didn’t face any legal consequences for contributing to Emma Barber’s (Nia Sioux) death. However, Thomas’ disturbing actions have left many hesitant to trust him.

Not only did Thomas keep Beth Spencer’s (River Davidson and Madeline Valdez) survival a secret, he did it while manipulating Hope Logan (Annika Noelle) into marriage. It was cruel to make Hope believe Douglas Forrester (Henry Joseph Samiri) was her only shot at being a mother. Thomas made it clear that Beth was gone and never coming back. It’s easy to see he only cared about his own desires.

Nevertheless, Thomas has been given a chance to rebuild his life. That’s certainly what Ridge Forrester’s (Thorsten Kaye) hoping he’ll do. He refuses to turn his back on his son, so Thomas will have someone in his corner. Ridge may have some lingering reservations when it comes to Thomas, but he’s not willing to feed him to the wolves like most other B&B characters.

Of course, Thomas has a lengthy history of troubling behavior. He struggles to do the right thing, even when he genuinely wants to. Playing by the rules just doesn’t seem to be in Thomas’ nature. The Bold and the Beautiful spoilers say we’ll see another example of that soon. During the week of September 23-27, Thomas will once again make a sneaky move – and he’ll immediately get caught.

In an effort to protect Douglas, Thomas will only be allowed supervised visits with his son. That won’t exactly work for Thomas, who’ll feel like he needs to step up and be the dad Douglas deserves. It looks like Thomas’ heart will actually be in the right place this time. Even so, Thomas will prove he’s a rulebreaker and perhaps raise red flags for Ridge.

The Bold and the Beautiful spoilers say Ridge will catch Thomas stealing some extra time with Douglas. He’ll visit the kid without supervision, which won’t be what was agreed upon. Ridge will find Thomas alone with Douglas, so he’ll call Thomas out. He’ll demand some answers, so Thomas will have to cover his blunder.

Naturally, Thomas will try to be smooth here. He’ll do his best to explain away the incident – perhaps by telling a lie or two. Thomas will definitely want to keep Ridge on his side, and he’ll want to keep building trust when it comes to Douglas, too. Still, this could serve as strike one and may be an indicator that Thomas the manipulator is returning.