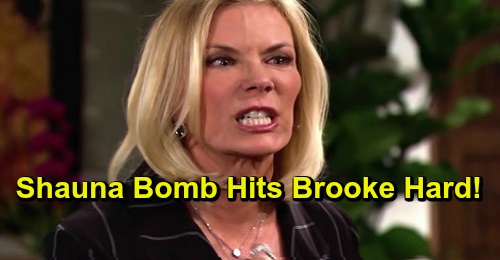 The Bold and the Beautiful (B&B) spoilers tease that Thomas Forrester (Matthew Atkinson) will have the ultimate battle with Brooke Forrester (Katherine Kelly Lang). These two really need to be steering clear of each other, but that never happens on a soap! Instead, Thomas will sneak a visit with Douglas Forrester (Henry Joseph Samiri) and infuriate Brooke in the process.

Their argument will get pretty vicious and will end with Brooke throwing Thomas off the property. She won’t want Thomas anywhere near Douglas or her family. That’s somewhat fitting since this showdown will bring a moment of clarity for Thomas. He’ll decide the Logans are the real problem here. Thomas will want to rid the Forresters of them – both personally and professionally.

Naturally, Thomas will start by targeting his father’s marriage. Ridge Forrester (Thorsten Kaye) is on Thomas’ side, but B&B fans know Brooke has a very different view. Thomas won’t want Brooke poisoning Ridge against him any longer. He’ll also be holding a grudge over Brooke’s shove, which led to his life-threatening fall off a cliff. Thomas will hate Brooke more than ever, so he’ll have every reason to seek revenge.

The quickest way to make that happen is to further shatter Brooke’s marriage. Thomas will find out about Ridge’s night with Shauna Fulton (Denise Richards), so he’ll manipulate Danny the bartender (Keith Carlos) into spilling the news to Brooke. Of course, Danny can only share his assumption. He can’t tell Brooke what happened behind closed doors, so she’ll surely confront Ridge.

The problem is Ridge previously kept Shauna out of the story. What’s Brooke supposed to believe now? Ridge can claim the night was innocent, but it doesn’t look that way when he’s been lying about it. Brooke may argue that Ridge should’ve told her the truth if no hot hookup was involved. She may have her doubts about Ridge’s version of events, especially since he was drunk and there’s not much trust between them these days.

The Bold and the Beautiful spoilers say Thomas will hope to end Brooke and Ridge’s relationship for good. He’ll feel confident he can eliminate any other Logan influence on the Forrester fam as well. Thomas will eventually seek Shauna’s help with that, so more trouble could be brewing.