BY Heather Hughes on May 31, 2019 | Comments: Leave Comments
Related : Soap Opera, Spoiler, Television, The Bold and the Beautiful 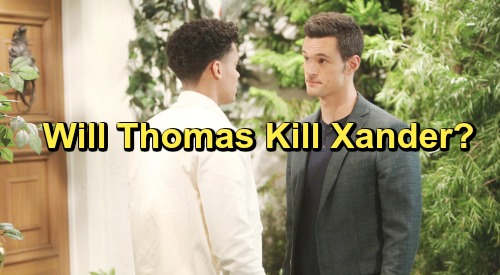 The Bold and the Beautiful (B&B) spoilers tease that Thomas Forrester (Matthew Atkinson) will be floored when he learns Beth Spencer is alive and well. Florence “Flo” Fulton (Katrina Bowden) will screw up big time when she inadvertently reveals the secret to Thomas. That move should leave Zoe Buckingham (Kiara Barnes) furious with her partner in crime.

Flo and Zoe already have enough on their plates trying to deal with Xander Avant (Adain Bradley). Just when they think they’ve got Xander under control, Thomas will join their inner circle and demand answers as well. He’ll be in complete shock when he learns the real story behind the night on Catalina Island.

However, The Bold and the Beautiful spoilers reveal that the truth won’t be exposed to Hope Spencer (Annika Noelle) yet. This storyline is about to take some extremely dark turns as it moves into thriller territory. B&B fans can expect some deadly outcomes before this hot plot concludes.

We have to wonder if the show might play up Thomas’ sinister side even more. The Bold and the Beautiful spoilers have been dropping hints about Thomas’ dark side. Ever since Atkinson debuted in the role, we’ve seen a different version of Thomas – and it’s about more than just the actor.

Thomas always been a very determined pursuer when it comes to women, but his manipulation has definitely taken on some extreme forms this time around. He’s been exploiting Caroline Spencer’s (Linsey Godfrey) memory and using innocent Douglas Forrester (Henry Joseph Samiri) as a pawn in his game. Thomas has proven that he’ll do pretty much anything to get what he wants.

Does anything also include murder?! Based on how Thomas has behaved, it wouldn’t be a completely unreasonable twist. It’d be right in line with the pattern they’ve shown for Thomas. He’s always upping the ante and taking things a bit further than before. If Thomas feels Xander’s about to blow up his chance at happiness with Hope, a confrontation might ensue.

It’s possible Thomas could kill Xander on purpose, but they could always make it an accident and cover-up if they want to protect Thomas’ longevity as a character. It’d be far easier for him to come back from inadvertently causing Xander’s death. Straight-up homicide would be pretty horrible.

At the same time, it would definitely make this story live up to the dark thriller status it’s headed toward. Whether it’s intentional or not, do you think Thomas will kill Xander? Would you like that twist or hate it? We’ll give you updates as other B&B news comes in. Stay tuned to the CBS soap and don’t forget to check CDL often for the latest Bold and the Beautiful spoilers, updates, and news.