The Bold and the Beautiful Spoilers: Thomas Makes Love to Zoe, Plays with Fire – Will Pregnancy Derail Hope Dream? 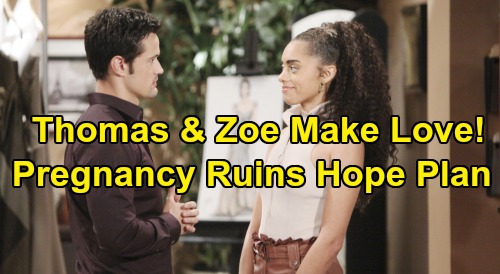 The Bold and the Beautiful (B&B) spoilers tease that Thomas Forrester (Matthew Atkinson) will play with Zoe Buckingham’s (Kiara Barnes) emotions. He’ll manipulate Zoe into thinking they have a real shot at a future together. Thomas will gush about the life he envisions with Zoe, but it’ll all be part of his plot to win over Hope Logan (Annika Noelle). He’ll remain uninterested in Zoe – at least as anything more than a pawn in his game.

B&B fans can expect Zoe to get swept up in the moment with Thomas. She’ll let herself get carried away by the romantic setup and Thomas’ undeniable charm. He may be manipulative, but he knows he’s got his good lucks and charisma working for him. Thomas will use all that to compensate for any lack of trust that’s lingering in the back of Zoe’s mind.

The Bold and the Beautiful spoilers say Thomas and Zoe will hit the sheets before the night’s over. Their date night will turn into an overnight thing – just like Thomas wanted. He’ll like idea of Hope thinking of him in bed with Zoe and hopefully getting jealous. That’s certainly not how Hope will be feeling at this point, but a delusional guy can dream!

Afterward, Zoe will be more hopeful than ever about Thomas’ changing for the better. She’ll think their night together really meant something, but she doesn’t understand just how convincing Thomas can be. The Bold and the Beautiful spoilers suggest Thomas will remain fixated on Hope and the united family he wants with Douglas Forrester (Matthew Atkinson). He may enjoy the act of sleeping with Zoe, but she’ll be nothing compared to Hope in Thomas’ opinion.

However, Thomas could be playing with fire in more ways than one. For starters, this hookup and any others that follow present a pregnancy option. Soaps are notorious for unplanned babies – and a bun in the oven for Zoe would really throw off Thomas’ plans!

We can’t forget Zoe was basically a crazy stalker when she came to town. Remember how obsessed Zoe was with Xander Avant (Adain Bradley) and how she’d flash crazy eyes while stroking her cat? Zoe was poised to be a nut job, so B&B could take her back in a stalkerish direction. If they do, we wouldn’t put it past her to get pregnant by Thomas intentionally.

Then again, it could just be an oopsy baby – like many soap babies that have come before it. Regardless, Thomas and Zoe could be headed into dangerous territory here. Wouldn’t that be the ultimate curveball for Thomas, who so desperately wants to build a family with Hope?

Just imagine if Thomas learns he may be forced to co-parent with Zoe and add another kid to the mix. Even if it’s only a false alarm, the thought of a Zoe pregnancy alone would be alarming! The Bold and the Beautiful spoilers say some great drama’s brewing no matter what, so stay tuned. We’ll give you updates as other B&B news comes in. Stick with the CBS soap and don’t forget to check CDL often for the latest Bold and the Beautiful spoilers, updates and news.