The Bold and the Beautiful Spoilers: Thomas Targets Brooke – Life In Danger Over Douglas Custody Battle?

BY Alexis Gregory on October 4, 2019 | Comments: one comment
Related : Soap Opera, Spoiler, Television, The Bold and the Beautiful 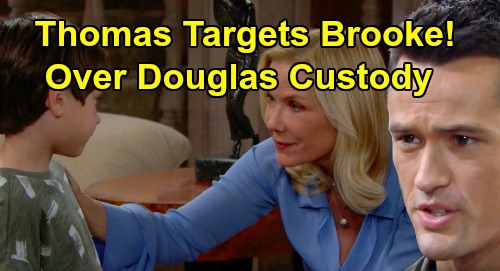 The Bold and the Beautiful spoilers suggest that things could get even more intense between Thomas Forrester (Matthew Atkinson) and Brooke Logan Forrester (Katherine Kelly Lang). Is it possible that Thomas could go into a rage when his stepmother refuses to back down? Could she become a target and if so, could Brooke’s life be in danger?

It’s no secret that Thomas has a lot of resentment towards his stepmother. After all, Ridge Forrester (Thorsten Kaye) left his family for Brooke. Even though it has been awhile since then, Thomas has never forgiven her. However, that isn’t the only reason he hates the woman.

B&B spoilers suggest that Brooke continues to push buttons. Not only does she let Thomas know exactly how she feels, Brooke slaps him right in the face! After what he did to Hope Logan (Annika Noelle), he deserved that slap. However, Brooke needs to heed his warning and be careful of the man she is pushing over the edge.

Once Thomas finds out about Brooke’s stipulation for Ridge, he could become completely unglued. He hasn’t been the best father to Douglas (Henry Joseph Samiri), especially in the past few months. When he finds out that Brooke ordered Ridge to get Thomas to sign guardianship over, well that could be his breaking point.

Just imagine what he could do if he loses Douglas to Hope and Liam Spencer (Scott Clifton). We speculate that he could go over the edge and the results won’t be pretty. Remember when Brooke heard Thomas’ warning echoing in her mind? That’s a big clue that she knows she is playing with fire.

Could Stepmother’s Life be in Danger?

The Bold and the Beautiful spoilers tease to expect Thomas to continue causing problems. He already has a scheme to break up Ridge and Brooke. Even though he succeeds, it might be too soon for a victory party.

If Thomas does lose custody of Douglas, we imagine he will blame Brooke. Could he go completely crazy and unleash his rage on her? Could her life end up being in danger? If so, who will save her before it’s too late? Could Ridge end up coming to her rescue, leading the two of them to reconcile? Will Ridge finally realize the evil that lives in his son is real? Stay tuned to B&B and don’t forget to check CDL often for The Bold and the Beautiful spoilers, updates and news.