BY hellodrdavis on August 7, 2019 | Comments: one comment
Related : Soap Opera, Spoiler, Television, The Bold and the Beautiful 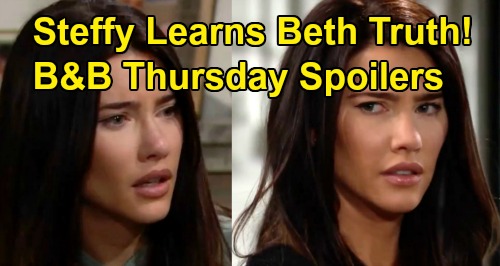 The Bold and the Beautiful spoilers for Thursday, August 8, tease that Steffy Forrester (Jacqueline MacInnes Wood) will get the news that she’s been fearing. As B&B viewers know, Steffy has been deeply concerned ever since she learned from Liam Spencer (Scott Clifton) that Douglas Forrester (Henry Joseph Samiri) was claiming that “Phoebe Forrester” was Beth Spencer (River Davidson and Madeline Valdez).

Of course, the whole idea of Phoebe being Beth just sounded ridiculous to Steffy, but B&B viewers could tell that Douglas’ statement combined with the news that Florence “Flo” Fulton (Katrina Bowden) may not have given birth to “Phoebe” had Steffy seriously worried. On Wednesday’s episode, Steffy will return from Kelly Spencer’s (Chloe Teperman and Zoe Pennington) doctor’s appointment to find Hope Logan (Annika Noelle) and Liam waiting for her.

Hope and Liam will have the difficult task of breaking the news to Steffy that the little girl that she’s been raising for months was adopted to her illegally, and as part of a baby switch scam orchestrated by Reese Buckingham (Wayne Brady). Of course, Steffy won’t know who Reese is, given that she never met him or even heard about him from her mother, Taylor Hayes (Hunter Tylo).

But soon, she’ll learn the horrible details about how Reese stole Beth shortly after her birth on Catalina Island, led Hope and Liam to believe that she had died, and then arranged for Flo to step in as a fake birth mother and facilitate the adoption of Beth to Steffy.

It’s going to take some time for this all to sink in. Steffy is probably going to fight the revelation, as she won’t want it to be true. Of course, she will be happy that Beth survived and is alive and well, but she’ll know as she’s hearing all the details unfold that it all means one thing: that she’s about to lose the little girl that she adopted, and in fact “Phoebe” never even existed.

B&B viewers should expect emotions to run high as Liam and Hope give Steffy some of the worst news that she’s ever faced. Look for some tense and heart-wrenching scenes as Steffy comes to realize the truth, and as she hears the terrible details about how she, Hope, Liam, and Beth were victimized by multiple parties.

Meanwhile, on the new episode of B&B on Thursday, August 8, Brooke Forrester (Katherine Kelly Lang) and Ridge Forrester (Thorsten Kaye) will be emotionally spent after hearing from Flo, Zoe Buckingham (Kiara Barnes), and Shauna Fulton (Denise Richards). They’ve promised that Reese and the ladies will pay for their actions, and they mean business.

The Bold and the Beautiful spoilers indicate that Brooke will continue to grill Flo, Zoe, and Shauna about their cover-up, and perhaps they’ll get to one of the most troubling (and likely explosive) aspects of the whole story – how Thomas Forrester (Matthew Atkinson) got involved and threatened them to stay quiet, all so he could marry Hope and secure her as a mother to Douglas.

That’s likely to seriously divide Brooke and Ridge on the spot, as Ridge might be hesitant to believe that his son could have done something so horrible. Perhaps the ladies will also mention Thomas’ involvement in Emma Barber’s (Nia Sioux) death as well, which should really outrage Brooke and devastate Ridge.