BY Heather Hughes on December 12, 2019 | Comments: one comment
Related : Soap Opera, Spoiler, Television, The Bold and the Beautiful 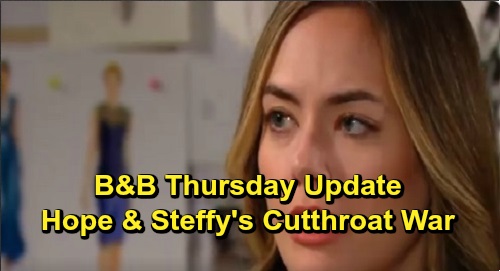 The Bold and the Beautiful (B&B) spoilers update for Thursday, December 12, teases that Thomas Forrester (Matthew Atkinson) will be thrilled when he gets what he wants. B&B fans know Thomas came up with the idea for a fashion showdown, which will involve putting Hope Logan’s (Annika Noelle) line up against Steffy Forrester’s (Jacqueline MacInnes Wood). Although Hope wasn’t keen on the idea at first, she’ll eventually decide she’s ready to dive in and fight for a win over her old rival.

Steffy will be teaming up with Sally Spectra (Courtney Hope) for this fierce fashion battle, so this is sure to bring some interesting scenes. Since Steffy has a competitive side, she’ll unleash it in a big way and count on crushing her opponent. Sally will be more than happy to pitch in and try to make Steffy’s line the best it can be.

Of course, Thomas will be just as confident that he can help Hope achieve victory, but for him the real victory will be strengthening their bond. He plans on making Hope see that they can be great allies. A good working relationship could lead to far more in Thomas’ opinion.

However, Thomas obviously wants to win and secure more opportunities like this. He can be competitive just like his sister, so he’ll try to get Hope fired up about working together and defeating Steffy. The Bold and the Beautiful spoilers say Hope and Steffy’s war will get pretty cutthroat as they fight for buyers. There’s a lot at stake including the future of their lines and bragging rights!

Over with Wyatt Spencer (Darin Brooks), he’ll find himself mulling over his complicated relationship and what he really wants. Liam Spencer (Scott Clifton) will sense that Wyatt’s got a lot on his mind, so he’ll push his brother to open up. It won’t be long until Wyatt divulges his setback with Sally and the reason behind it.

There’s a good chance Wyatt will bring up Sally’s blunder, which involved calling Wyatt by Liam’s name. Sally insisted it was a simple slip of the tongue and assured Wyatt she only had eyes for him. Even so, Wyatt’s battling doubts about her commitment as well as his own. Is he really ready to pledge his forever love to Sally?

The Bold and the Beautiful spoilers say Liam will have some advice for Wyatt. He’ll probably point out that there’s nothing left between he and Sally – not that there was ever much of anything at all! Sally and Liam certainly weren’t some epic love story, so Liam won’t want Wyatt worrying about that. Nevertheless, Liam should understand that relationships can be tricky and acknowledge how easy it is to be torn.

Perhaps Liam will advise Wyatt to follow his heart, even if the path it leads him down is a rocky one. Wyatt needs to be all in or this is never going to work. In reality, Wyatt’s lingering feelings for “Flo” Fulton (Katrina Bowden) are likely more of a factor than he’s willing to admit.