BY hellodrdavis on July 3, 2019 | Comments: one comment
Related : Soap Opera, Spoiler, Television, The Bold and the Beautiful 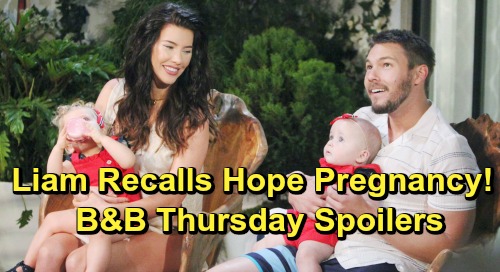 The Bold and the Beautiful spoilers for Thursday, July 4, tease that Thomas Forrester (Matthew Atkinson) will push forward with his manipulative plans. He is riding high from the results of his last plan, which was to drug Liam Spencer (Scott Clifton) and get him to fall into bed with Steffy Forrester (Jaqueline MacInnes Wood). His plan went off just as he hoped, and Liam slept with Steffy, absolutely crushing Hope Logan (Annika Noelle).

Well, now that Thomas has driven what appears to be the final wedge between Hope and Liam, he can pick up his plan to make Hope his wife. Previously, Hope turned down Thomas’ marriage proposal on the grounds that she still loved Liam and just wasn’t ready yet. But now, Thomas will feel that he is in better standing and a new proposal will be in order.

But according to B&B spoilers, it won’t be a typical marriage proposal that Thomas has planned. He’ll decide that the proposal would be more palatable to Hope if it were to come from Douglas Forrester (Henry Joseph Samiri). So, Thomas will do his best to get little Douglas on board with asking Hope to marry his daddy.

On Thursday’s episode of B&B, look for Thomas to sit Douglas down for a “man to man” chat about the importance of Hope becoming Douglas’ new mommy. Of course, Douglas loves Hope, so he’ll jump right on board and agree to propose to Hope for Thomas. It should be loads of cute, just like Thomas wants.

Meanwhile, on the new episode of B&B on Thursday, July 4, Liam will be feeling glum. After his big discussion with Hope, during which they agreed to move on with their lives, he won’t be feeling so upbeat. It will be a difficult 4th of July holiday for him, and as he tries to be cheerful and happy for Steffy and the girls, he won’t be able to help but remember last year’s holiday.

As B&B viewers will remember, last year on the 4th, Hope told Liam that she was pregnant with their daughter Beth Spencer. It was an amazing time for the two of them, and it signaled the beginning of some very good times for the couple. But given how their relationship just recently ended, Liam will be feeling melancholy.

Steffy will step up to comfort Liam during this time, and surely the time he spends with her, Kelly Spencer (Chloe Teperman and Zoe Pennington), and Phoebe Forrester (River Davidson and Madeline Valdez) will lift his spirits a bit. He’ll definitely be headed in a new direction this year, and it will be a lot to process.