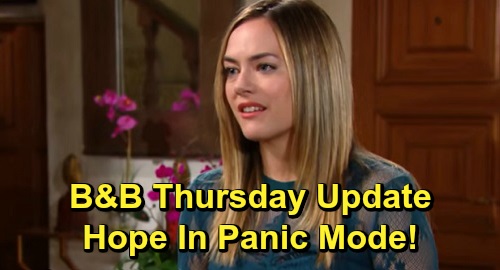 The Bold and the Beautiful (B&B) spoilers update for Thursday, November 7, teases that Thomas Forrester (Matthew Atkinson) will feel like he’s on the verge of getting what he wants. He’s eager to seal the deal with Hope Logan (Annika Noelle) – but only if she’s willing to play by his rules. Now that Hope’s arrived to find a romantic setup at Forrester Creations, Thomas is ready to make more demands.

Douglas Forrester (Matthew Atkinson) is at the office as well, so he’ll naturally be used as a tool for manipulation. The Bold and the Beautiful spoilers say Thomas will try to use Hope’s vulnerable side against her. He knows how much Hope wants to be Douglas’ official mother, so he’ll work this angle and push for quid pro quo. Thomas will think it’s only fair for him to reap some benefits if he’s going to sign the adoptions papers.

B&B spoilers say Thomas will keep piling on his conditions – much to Hope’s dismay. She’ll quickly feel this situation turning into something sinister. Thomas’ obsession with Hope will take over, so she may be concerned about the lengths he’ll go to. Of course, Hope’s willing to do some drastic things herself – and she’ll prove it over the next few episodes.

We have to mention the disturbing vat of hydrochloric acid that’s awaiting. Soaps don’t typically introduce a vat of something unless someone’s going to fall into it! Hope and Douglas will be safe next week, so Thomas could be in serious trouble here. However, we can’t rule out some sort of trick on Thomas’ part. You just never know what Thomas’ has up his sleeve.

Regardless, Hope’s priority will be Douglas throughout this nightmare. The Bold and the Beautiful spoilers say Hope will grow concerned about the kid. Douglas will ultimately be separated from Hope and Thomas, but Thomas will refuse to offer up the kid’s location. That could lead to the panicky showdown that’s set to happen on Friday.

Until then, Ridge Forrester (Thorsten Kaye) will have a lot on his mind – and Shauna Fulton (Denise Richards) will be happy to listen. The Bold and the Beautiful spoilers say Shauna will support Ridge as he opens up about his family. Ridge will discuss the issues surrounding Thomas as well as his crumbling marriage. His love for Brooke Forrester (Katherine Kelly Lang) remains, but their problems seem insurmountable right now.

Ridge will also admit how he feels about Shauna, so she’ll be pleased that she’s made an impression on him. The Bold and the Beautiful fans won’t want to miss the hot drama ahead. We’ll give you updates as other B&B news comes in. Stay tuned to the CBS soap and don’t forget to check CDL often for the latest Bold and the Beautiful spoilers, updates and news.