The Bold and the Beautiful Spoilers: Thursday, October 3 Update – Hope and Liam Try To Protect Douglas From Abusive Thomas

BY hellodrdavis on October 3, 2019 | Comments: one comment
Related : Soap Opera, Spoiler, Television, The Bold and the Beautiful 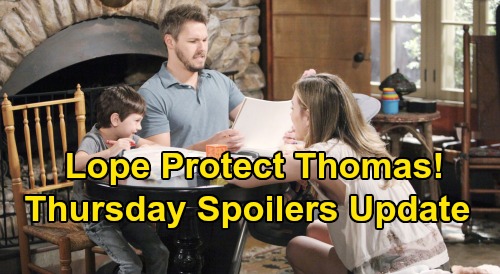 The Bold and the Beautiful spoilers update for Thursday, October 3, tease that Hope Logan (Annika Noelle) will be feeling concerned. She and Liam Spencer (Scott Clifton) have been spending a lot of time with Douglas Forrester (Henry Joseph Samiri) lately, and they’ve become pretty attuned to his personality. That’s why they were particularly upset after Douglas came home from a play date worried about his father being angry with him.

Soon thereafter, Hope and Liam found out that Thomas Forrester (Matthew Atkinson) had paid Douglas a visit and chastised him again for telling the truth about Beth Spencer (River Davidson and Madeline Valdez). Douglas was upset that his dad was mad at him, and he was experiencing the physical symptoms of anxiety – something that a child of his age shouldn’t be dealing with.

Well, Hope and Liam think that Thomas’ actions with respect to his son are totally unacceptable, and on Thursday’s B&B episode, Hope will decide that it’s time to take action. She’ll have a talk with Liam and ask him to help her keep Thomas as far away from Douglas as possible, and it looks like Liam will readily agree to the plan.

But what exactly will Hope have in mind to keep Thomas away from his son? Well, one possibility is that she’ll seek legal avenues to protect Douglas. After all, she’s gotten close to Douglas over the past few months, and she might want to try to seek emergency temporary custody of the little boy. That would be a drastic move, but since Thomas is now essentially harassing his son during their visits, she might have a case.

Meanwhile, on the new episode of B&B on Thursday, October 3, Thomas will move on to phase two of his big plan to destroy Ridge Forrester (Thorsten Kaye) and Brooke Forrester’s (Katherine Kelly Lang) marriage. He was absolutely giddy with happiness when phase one of his plan – to make sure Brooke found out about Ridge’s night with Shauna Fulton (Denise Richards) – worked out so well. But he doesn’t want to stop there.

According to B&B spoilers, Thomas will decide to go directly to Shauna and ask for her help for phase two. He’ll approach Shauna and ask her to help him break up Ridge and Brooke, and he just might ask Shauna to actively pursue Ridge romantically, so as to cause more problems in “Bridge’s” marriage.

So, how will Shauna react to Thomas’ request? It’s a pretty risky move on Thomas’ part to approach Shauna, because Shauna could wind up going to Ridge and telling him what Thomas is up to. Or, Shauna could realize that Thomas could be her ticket to getting Ridge all to herself…something that she would absolutely love.

Shauna has been bonkers for Ridge ever since they spent the night together in the room upstairs at Bikini Bar, so she just might see an opportunity in Thomas’ proposition – that is, if she can get over the fact that he basically threatened Flo Fulton’s (Katrina Bowden) life not that long ago. We’ll see if Shauna agrees to participate in Thomas’ plan, but we suspect that there’s a good chance that she will.

It sounds like a lot of B&B drama is heating up for Thursday’s episode, so stay tuned! We’ll give you updates as B&B news comes in. Stick with the CBS soap and don’t forget to check CDL often for the latest Bold and the Beautiful spoilers, updates and news!