The Bold and the Beautiful Spoilers: Thursday, September 12 – Ridge Walks Out On Brooke After Epic Fight, Meets Shauna at Bikini Bar

BY hellodrdavis on September 11, 2019 | Comments: one comment
Related : Soap Opera, Spoiler, Television, The Bold and the Beautiful 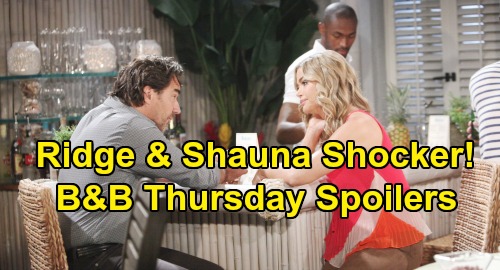 The Bold and the Beautiful spoilers for Thursday, September 12, tease that Ridge Forrester (Thorsten Kaye) will find himself completely fed up with Brooke Forrester (Katherine Kelly Lang). As B&B viewers know, Ridge and Brooke are in the middle of a tense argument over the deal that Ridge made with Detective Alex Sanchez (Jeremy Ray Valdez) – a deal that ended up protecting Thomas Forrester (Matthew Atkinson) from further scrutiny but ultimately set Flo Fulton (Katrina Bowden) free. Brooke is livid over the deal, and she let Ridge know it in no uncertain terms.

In fact, the argument has degenerated to a point where Brooke has angrily declared that Thomas is not welcome back in their home, and that she’s going to do everything she can to keep Thomas away from his son Douglas Forrester (Henry Joseph Samiri). That really set Ridge on edge, and he declared in turn that there was no way that Brooke was going to keep Douglas away from Thomas. The two appear to be at a serious standstill.

Well, on Thursday’s episode, it looks like things will continue to escalate between Ridge and Brooke. Look for their fierce argument to continue, as neither of them even considers backing down. From Ridge’s perspective, he needs to be there for Thomas, despite all of the terrible things Thomas has done. He can’t just abandon his son and declare that Thomas has no rights to Douglas.

But from Brooke’s perspective, Thomas crossed a line that he can’t readily recover from. After all, he lied to and manipulated both Hope Logan (Annika Noelle) and Douglas, and he kept Beth Spencer (River Davidson and Madeline Valdez) away from her parents for months. And then there’s Thomas’ threats against Flo and Emma Barber (Nia Sioux). Brooke thinks that Thomas still poses a threat to everyone and just can’t be trusted.

Ultimately, these two aren’t going to settle their differences, and instead of resolving the argument, B&B spoilers say that Ridge will wind up leaving the house in anger. He’ll leave Brooke stunned and upset, and from the house it looks like he’ll head to Bikini Bar, where he’ll proceed to drown his sorrows in alcohol.

Meanwhile, on the new episode of B&B on Thursday, September 12, Shauna Fulton (Denise Richards) will decide to pay Brooke a visit. Shauna is feeling pretty grateful toward Ridge right now, given Ridge’s willingness to sign off on Flo’s immunity deal. But, as Shauna recently told Flo, she figures that Brooke probably won’t be happy with the situation, and she’s 100% right about that. She’ll decide to go see Brooke, and it looks like she’ll arrive at the house shortly after Ridge storms out.

Well, Brooke won’t be happy at all to see Shauna. It looks like Shauna will try to appeal to Brooke, and she may want to try to explain how grateful she is to Ridge for signing off on Flo’s immunity deal. But her timing will be horrible, given the huge argument that Brooke and Ridge have just had over the deal, and Brooke will apparently push her right on out of the house. That will leave Shauna irked, and B&B spoilers indicate that from here, she’ll head to Bikini Bar.

Of course, all of this means that both Ridge and Shauna will wind up at Bikini Bar together, and ongoing B&B spoilers say that the two will find each other there. Look for Shauna and Ridge to commiserate together after each feel they’ve been given a raw deal by Brooke.