The Bold and the Beautiful Spoilers: Thursday, September 19 Update – Wyatt Has Mercy on Tearful Flo – Quinn Pushed to Meddle by Shauna 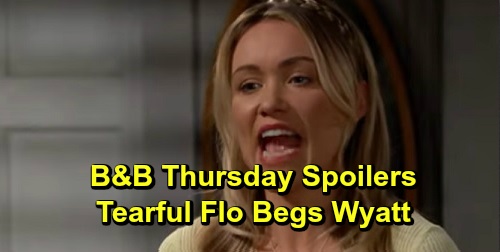 The Bold and the Beautiful (B&B) spoilers update for Thursday, September 19, teases that Shauna Fulton (Katrina Bowden) will turn to Quinn Forrester (Rena Sofer) for help. There was tension last time Shauna tried to seek assistance from Quinn, but things have changed since then. Florence “Flo” Fulton (Katrina Bowden) is a free woman and has a shot at reclaiming her life.

Shauna certainly doesn’t intend to let this opportunity pass Flo by. However, it’ll take a team effort if Flo’s going to win back her love. She desperately wants a future with Wyatt Spencer (Darin Brooks), so Shauna will think Quinn’s the perfect person to pitch in. After all, Wyatt’s always been a bit of a Mama’s boy and Quinn has done her fair share of meddling over the years.

Shauna will be concerned about the threat Sally Spectra (Courtney Hope) poses. She’ll want Quinn to act fast before Wyatt gets in too deep with Sally again. Shauna will push Quinn to remember Flo as the sweet girl she once was and still is – at least in her eyes. She’ll think Quinn knows Flo’s a good person at her core.

Quinn will still disapprove of Flo’s actions and lies, but she’ll get that sometimes mistakes are made. B&B fans know Quinn’s made plenty of them! Sally’s mistakes were far less disturbing than Flo’s, but probably won’t matter to Quinn. She may cut Flo some slack and agree that Sally’s just not the woman for Wyatt. Deep down, Quinn will still feel like Flo and Wyatt belong together.

Shauna and Quinn should settle back into their sneaky friendship – just in time to do some plotting! The Bold and the Beautiful spoilers say Shauna will want Quinn to interfere in Wyatt’s romance. She’ll think Quinn can pull Wyatt away from Sally and push him right back into Flo’s arms. Part of Quinn may want to stay out of this, but another part of her will be unable to resist.

Quinn will indeed meddle in Wyatt’s love life next week, but let’s talk about Flo in the here and now. She’ll pay Wyatt another visit and hope she can somehow earn his forgiveness. Flo will understand that she doesn’t deserve it, but she’ll make a tearful plea anyway. She’ll remind Wyatt of her great love for him and wonder if he can ever get past this.

The Bold and the Beautiful spoilers say Wyatt’s response will be a compassionate one. He can’t forget what Flo did, but it sounds like he’ll forgive her. Even so, Wyatt will make it clear that he doesn’t want to reunite. He’s focused on moving forward with Sally, but you can bet Flo won’t give up!

Another hot episode’s coming up, so don’t miss all the action. We’ll give you updates as other B&B news emerges. Stay tuned to the CBS soap and don’t forget to check CDL often for the latest Bold and the Beautiful spoilers, updates and news.