BY Heather Hughes on August 20, 2019 | Comments: one comment
Related : Soap Opera, Spoiler, Television, The Bold and the Beautiful 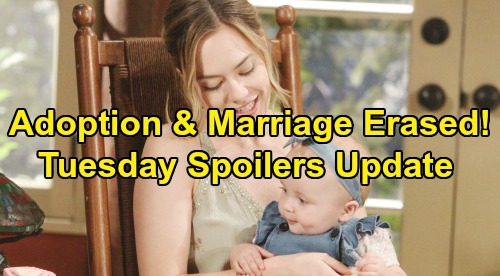 The Bold and the Beautiful (B&B) spoilers update for Tuesday, August 20, tease that Hope Forrester (Annika Noelle) will be ready to put the past behind her. Naturally, that means getting an annulment as soon as possible. Hope never loved Thomas Forrester (Matthew Atkinson) anyway, but there’s absolutely nothing left now. Thomas was a manipulative monster for keeping Hope’s baby from her like that.

Hope doesn’t even know the extent of Thomas’ cruel manipulation of Douglas Forrester (Henry Joseph Samiri). However, she does know she wants to erase this marriage immediately. Hope will get some help with that task in Tuesday’s B&B episode. Justin Barber (Aaron D. Spears) will get the paperwork started for this annulment, which will be the first step toward Hope’s freedom.

Of course, there’s another legal matter to take care of and it involves Hope’s daughter. Beth Spencer’s (River Davidson and Madeline Valdez) adoption may have been illegal, but Justin still needs to undo it. Hope will want to make sure Beth Spencer is Beth Spencer in every sense of the name. “Phoebe Forrester” will soon be erased along with Hope’s marriage, so she’ll be happy about this new chapter.

Other Bold and the Beautiful spoilers say Ridge Forrester (Thorsten Kaye) will face some difficult questions. He’ll be on edge as Detective Alex Sanchez (Jeremy Ray Valdez) grills him about Thomas and his involvement in Emma Barber’s (Nia Sioux) crash. The detective will also be interested in grilling Thomas himself, but finding him could prove challenging.

Thomas is in hiding and will dodge Ridge’s calls while he works on a plan. He’s delusional enough to believe he still has a shot with Hope, so he’ll give this mission his full attention. The Bold and the Beautiful spoilers say Hope will fill Thomas in on the annulment before long. Instead of deterring Thomas, that phone conversation will make his rage burn like never before.

B&B viewers can expect the drama to spiral out of control over the next few episodes. Thomas will pay a steep price for his unhinged behavior! We’ll give you updates as other news comes in. Stay tuned to the CBS soap and don’t forget to check CDL often for the latest Bold and the Beautiful spoilers, updates and news.