The Bold and the Beautiful Spoilers: Tuesday, November 12 – Hope Confides To Mom She Killed Thomas – Steffy Blasts Brooke to Ridge

BY hellodrdavis on November 11, 2019 | Comments: one comment
Related : Soap Opera, Spoiler, Television, The Bold and the Beautiful 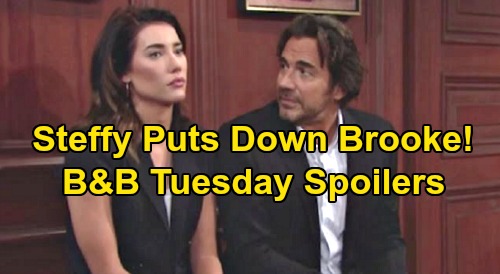 The Bold and the Beautiful spoilers for Tuesday, November 12, tease that Hope Logan (Annika Noelle) will return home from Forrester Creations with big news for Brooke Forrester (Katherine Kelly Lang). As B&B viewers know, Hope believes that she most likely shoved Thomas Forrester (Matthew Atkinson) over a catwalk and into a vat of (supposedly) hydrofluoric acid – a substance that can completely disintegrate a human body.

Hope was completely rattled by this turn of events, and she’s going to come home with quite a story for Brooke. First off, she’ll share the news that Thomas signed the papers giving her joint custody of Douglas Forrester (Henry Joseph Samiri) and making her Douglas’ adoptive mother. Brooke should be thrilled about that development, since she’s been wanting Hope to wrangle custody of Douglas for some time.

But Brooke will surely have some questions as to how this all came about. And it looks like Hope will have a lot to tell her. She’ll likely recount the story of how she, Thomas, and Douglas shared a family dinner together, then Thomas took Douglas somewhere unknown. That was followed by Hope leading Thomas to believe they’d have more family moments in the future, then by Thomas signing the papers.

But then, as B&B viewers know, things took a turn, and Thomas realized that Hope had manipulated him. This resulted in Hope racing through the Forrester building looking for Douglas, and an eventual confrontation on the catwalk, where Hope shoved Thomas and he fell into the vat of liquid that Charlie Webber (Dick Christie) later told Hope was hydrofluoric acid.

Hope will tell Brooke all about how she went back to the vat and looked for Thomas but was told to leave by a man in a hazmat suit. Of course, it’s entirely possible that the man in the hazmat suit was actually Thomas, who had made his escape from the vat, but Hope didn’t seem to suspect that this could be the case. At any rate, B&B spoilers indicate that Hope will be upset as she relays all of this to Brooke and she’ll state fearfully that she thinks she killed Thomas.

The Bold and the Beautiful spoilers also indicate that Brooke will take all this information in, and as she does, her instincts to protect her daughter will kick in, too. It appears that Brooke will urge her daughter to take the win and become Douglas’ mother, while keeping quiet about what the thinks might have happened to Thomas. After all, there’s no proof that anything happened to Thomas, so Hope should be safe if she just stays mum.

Meanwhile, on the new episode of B&B on Tuesday, November 12, Ridge Forrester (Thorsten Kaye) will go from his tense visit with Brooke to Steffy Forrester’s (Jacqueline MacInnes Wood) place. While there, Steffy will take the opportunity to weigh in on Ridge’s problems with Brooke. It looks like Ridge might open up to his daughter and share the problems he and Brooke have been facing.

Of course, in so doing, Ridge will necessarily have to tell Steffy all about Brooke’s attitude and posturing against Thomas. That will probably irk Steffy. Even though Steffy has her own issues with Thomas, Thomas is still her brother, and she won’t like Brooke’s assertions that Thomas is dangerous and irredeemable. And she probably won’t like Brooke’s belief that Thomas doesn’t deserve custody of his own son.

According to B&B spoilers, Steffy will totally unfilter and give Ridge a piece of her mind when it comes to Brooke and what Brooke’s capable of. She’ll give her raw opinion, and that may leave Ridge shaken in the end. We’ll see exactly what Steffy has to say, but she might warn Ridge about Hope’s determination to raise Douglas and caution that Brooke’s probably in on that plan, too.